Monster in My Pocket 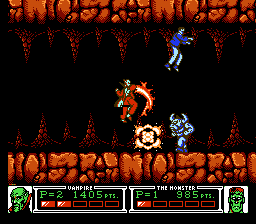 Watch
This game follows the adventures of miniature Dracula and Frankenst… rather, "Vampire" and "The Monster" as they dodge giant golf balls, fight miniature Godzillas and ultimately do battle with a massive head on an equally large television screen.
The authors frequently make use of two players simultaneously to both fight enemies quicker and also provide choreographed dancing. This also allows for more damage- and death-abuse to be used to save time.