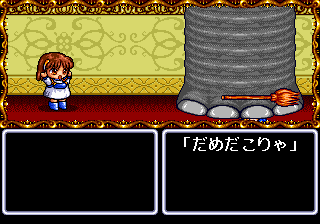 Watch
Madou Monogatari (魔導物語) is an RPG best described as 'strange'. The game has overly cute design and the battles are probably a little different than you would expect. The story revolves around a girl who is on a quest to pass her final exam in a magic school.
A defining moment is one of the cutscenes, where a slime is encountered and suddenly defeated by a strange girl bursting through a brick wall. Then, an equally strange armored knight drops in from the ceiling and the two of them proceed to ignore you and chase each other away.
The fast completion time is achieved mostly by using a random-effect spell, which has a small chance of producing a devastating elephant stomp (yeah, really). Naturally, in a TAS, the "small chance" gets a new meaning.
You can see this movie played back on an actual Genesis here!
The baseline tab shows the default movie beating the game as fast as possible without any special conditions.