Put on a lizard and go for an adventure!

Lizard is a new homebrew game by Brad Smith, released for NES and Windows/OSX/Linux in 2018. In this game, you literally wear lizard suits which grant you different abilities, some of which are required to reach the end of the game. It is as much exploration as it is platforming, similar to what the original Metroid was.

Hello! I'm juef and this is my first TAS. The ending is reached in 75354 frames (a tad under 20 minutes, 54 seconds), which is about 102 seconds faster than the current record by 0garrison. The route is very similar, except for a different boss order (strictly to get better positions for critters) and a handful of new strategies.
There isn't much to say about this, as the game is pretty straightforward once you know where the lizards and bosses are. Most of my time was spent on entertainment during wait times, and movement optimization. Should improvements come up (and I hope they will), I suspect they will mostly be from a different route and better critter/boss manipulation. Although I have done my very best to optimize movement, I suspect veteran TASers will find ways to shave frames here and there as well. While the choices made for this movie is pretty self-explanatory in my opinion, I will gladly provide explanations and comments in the submission forum.
Edit (2018-03-17): Forgot to mention something important! I applied the following suggestion from the game's author: The starting seed of the random number generator will not be deterministic on hardware after power-on. If you wish to record a TAS that can be played back reliably, hold LEFT + RIGHT when pressing START to begin the game, which will initialize the random seed to a consistent starting value. To verify this worked correctly, you can check the password, which will be set to 11111. 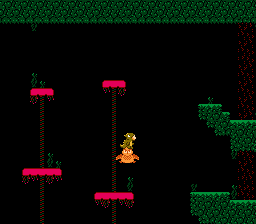 GoddessMaria: Judging...
GoddessMaria: On the grounds of optimization, it looks fine. On console, it plays reliably from start to finish so that's also good. Entertainment wise, it doesn't drag on for too long and the audience response has been positive, overall.
Accepting.
fsvgm777: Processing.
Last Edited by admin@tasvideos.org on 1/1/2022 6:13 PM
Page History Latest diff List Referrers