If resetting is done while WRAM is being transferred to SRAM, a mixed SRAM is created. When reset between the X / Y address, it warps horizontally from the SRAM position, but it needs to pass a checksum. It is also possible to mix the state of various event flags.

This movie abuses subframe reset. Some untouched objects will destroy memory when checked. Memory after $1417 will be destroyed if some untouched objects are checked. This game's V-blank interrupt has a jump address set to $1F00, which is dynamically rewritten when changing game scenes. If this address is destroyed, the program of this game jumps to $000000 by the BRK opcode. 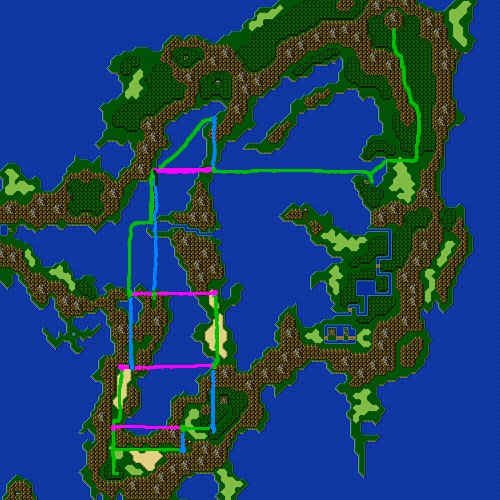 A direct page is 256 bytes that SNES CPU frequently accesses, and it has a memory address set according to the scene of the game different. In this game, the jump address of the BRK opcode is set to $000000. The direct page is set to $0000 in the battle scene, and pad input is put in $0000-$0005. But after loading the save data the memory will be filled with 0. Therefore to execute arbitrary code it was necessary to fight before checking the helmet. However, because it is disturbed by the "no-encounter flag ($0A53:0x80)", you need to see the event getting off Chocobo.

When Joypad-Registers was read by unjust timing, bit position slipped, so I did the input by which that was considered.
Actual Joypad binary

Dead zombie and chemist glitch could also do Arbitrary Code Execution likewise, but I thought the second world was far.

Masterjun: This looks interesting. Judging.
Masterjun: An important part to note for this run is the fact that it executes controller registers while they are being updated. This is known to not be emulated in a correct way on emulator. This gives this run a high chance of not working on console at all. However, leading the game code to the controller registers is done perfectly fine, so while these exact input sequences probably won't work on console, it's likely there are indeed some inputs which work. The run wouldn't look very different, so we can safely say that this isn't a problem.
Important to note is if there was a submission that is a bit longer, but with a more accurate way of beating the game in terms of emulator accuracy, then it can count as superior and obsolete this movie.
No other problems with this run and the viewer feedback has been quite good as well.
Accepting to Moons.
fsvgm777: Processing.
Last Edited by fsvgm777 on 4/28/2018 6:38 PM
Page History Latest diff