Cho Ren Sha 68K (translated as Super Autofire 68000) is a shmup developped for the Sharp X68000, then later ported to Windows by its author.

(Link to video)
(The encode has no sound because I didn't manage to dump audio with Hourglass. If someone manages an encode with sound, I would appreciate it.)

This is a 1062 frame improvement over my previous movie.
"SHOW TIME!!" is a hidden mode in this game, accessible by going into the special menu ("隠し Mode",literally Hidden Mode), done by holding up for 5 seconds at the option menu. We set the Stage index to 0xF to access it, which also activates suicide bullets for us (which I left on, as disabling it would waste frame.
This special stage showcases three unused boss patterns not found anywhere else in the game, including an unused third boss (the mechanic spider-esque boss, seen last.) The level is not very balanced; the second boss is much harder than the two others, with very hard and fast patterns in the Windows version (which has no slowdown) and a lot more health. The other two bosses have more sensible patterns, fitting for a Stage 2 and Stage 4 boss (first and third) respectively.
Over my previous submitted movie, this one reaches a more sensible goal: loop all of Showtime's content once (which means beating the three bosses), then die. The arbritrary restriction used here is "no bombs", for entertainement; a run that does uses bombs consists on sitting on top of bosses for the run.
The new trick here is death abuse: upon death, we get some invicibility frames. The ship can damage enemies while invicible (dealing significant damage every frame.) It's often better to miss some shots to get more invicibility in, as a single frame equals to 8 groups of level one shots.
Shooting is done by pressing a button: it does not autofire, hence we can tweak its timing a bit. Shots can be only made in groups, consisting of three volleys:
Each green shot deals double damage and awards double points. Because of how each subsequent volley angles outwards a little further than the last, this limits our movement options a bit depending on the boss hitbox in regards to entertainement, especially on the second boss with a very limited hitbox. Nonetheless, I use my opportunities as much as possible to create an hopefully entertaining run.
The strategy for this run consists of mostly hitting all shots, then finish the boss by ramming into him (one frame of contact damage) and use the invicibility given by the death to start damaging the next boss, and repeat. 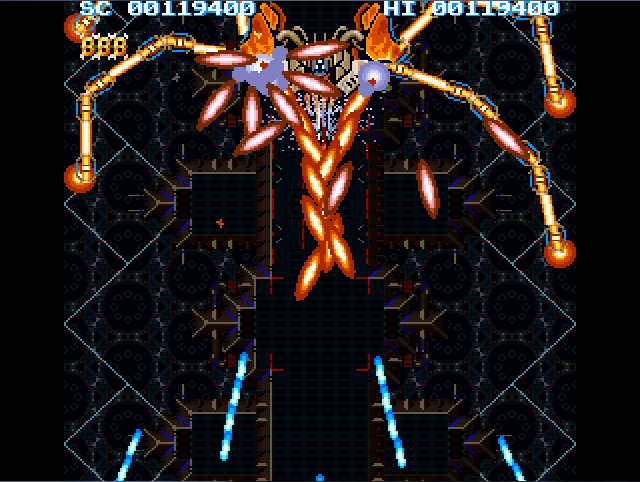 4104
feos: Judging...
feos: Even Hourglass r83, that can run this game in widnowed mode, despite the fact that the game doesn't support it, fails to dump any audio for this game. And HG r81, regardless of settings (most of them don't even let the game launch). Problems related to such cases are explained in details here: #5317: ThunderAxe31's Windows Pause Ahead in 00:59.42. Rejecting for technically-not-an-emulator (which Hourglass is) problems.
Last Edited by admin@tasvideos.org on 1/1/2022 6:13 PM
Page History Latest diff