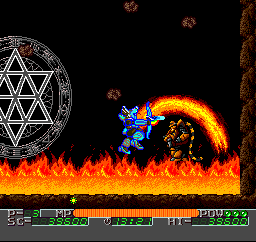 Madou King Granzort is a game made to demonstrate the graphical prowess of the SuperGrafx, a new model of the TurboGrafx-16/PC Engine that was backwards compatible with its game library. It featured four times the PCE's RAM, two scrolling background layers, two sprite layers, and six audio channels with an additional ADPCM channel when the CD-ROM peripheral is attached.
The game itself is based on a mecha anime series of the same name. Granzort is a Madou King robot summoned by a boy named Daichi to stop the evil Jadou Clan from taking over both Earth and the moon. There are three colors of robots, representing Earth, Wind, and Water, all of which can fly for a limited time, shoot enemy monsters or bounce on their heads to defeat them.

Watch
The title of the series upon which this game is based, and therefore the game itself, has been rendered a variety of different ways in English; this is perhaps indicative of just how bizarre an experience playing this game is.
This is an improvement of 50.17 seconds over the previous movie, thanks to better optimisation and better strategies on the bosses. Please read the authors' comments for more details.
This game was released for the SuperGrafx, a slight modification of the TurboGrafx-16/PC Engine meant to enhance the graphical capabilities of the console.
The baseline tab shows the default movie beating the game as fast as possible without any special conditions.