Castlevania: Spectral Interlude is a Castlevania fangame for the ZX Spectrum, developed by Rewind and released in 2015. It mostly pays homage to the classic Castlevania games of the NES era, particularly Simon's Quest, but also takes on elements from later "Metroidvania"-style titles in the series.
Regarding the plot/timeline, the game is set in the early 1800s, a few decades after Symphony of the Night, with the plot aiming to explain the disappearance of Richter Belmont and the Belmont clan after said game. The protagonist of the game is Richter's son, Simon Belmont (named after his ancestor of classic Castlevania fame), who with the help of sorcerer Joseph aims to remove Dracula's evil influence on the world by collecting demonic altar pieces, summoning Dracula, and whipping him to death as usual. However, some things don't go exactly as planned...

The goal of this movie is 100%/full completion of the game. There are quite a few factors of (full) completion for this game, so this movie aims to achieve all of the following:

So, naturally, meeting Joseph is the first event that's going to happen in this run.
At this point, going west would eventually just lead to a dead-end red Altar without the required pieces to activate it, so going right towards town is the only reasonable option.
The only important items here for now are the Holy Water and Purifying Fire, but the other items are bought anyway because we have the money for it and we need to get them down the line regardless. We don't have money for everything, but the rest will come later.
The heart upgrade would enable a second Purifying Fire use for the boss, which would save about 12 seconds, but it's not worth the 45 seconds it takes to get it. And this area needs to be backtracked to later anyway, as it contains a teal Altar piece that requires the teleport ability from much later on.

This is a 25-second detour, but it's worth it - the single upgrade will save multiple hits on the Red Altar bossfight, brings skeletons down from 2 whip hits to 1 to kill, and Mermen from 3 hits to 2. This will make up for the time loss over the course of the next section. 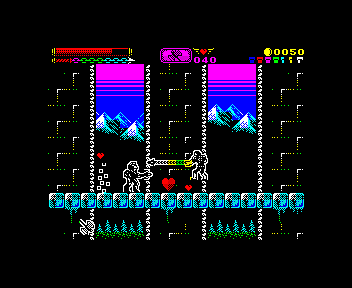 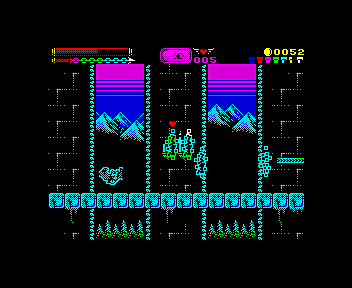 Special thanks to Asnivor, for making ZXHawk and making this TAS (as well as ZX Spectrum TASing in general) a possibility!
ThunderAxe31: Judging.
ThunderAxe31: Before everything else, it must be noted that unofficial games need to be high quality and notable in order for movies made with them to be acceptable. This is clearly not a problem in this case, since this homebrew game showcases gorgeous graphics and music, while featuring a very extensive gameplay and diversity for a ZX Spectrum game.
This game doesn't seem to inform the player when an upgrade is maxed out, nor does show beforehand what the maximum achievable is; the same can be said for collecting all items. The only way to ultimately confirm the limits would be to reverse-engineer the game code, which has nothing to do with playing the game normally and thus doesn't work as a full completion yardstick.
It could be argued that the map could be confirmed to be completed, thanks to the second map upgrade showing undisclosed rooms nearby to the player position; however this can be debatable since it requires the player to walk through the whole world looking for the existence of any undisclosed room, which also means that this feature will work for all cases.
Full completion is usually recognized by the fact that a game features optional challenges or requirements, and that clearing them results in the game awarding the player with a different ending cutscene, a different ending message, or simply by displaying a full percentage gauge. The only clear and obvious full completion scenario applicable for this game is reaching the hidden/true ending, as it requires the player to beat the optional boss, Death; all the other goals of this movie aren't clear or obvious, as explained in the previous paragraph.
Since the goal chosen for this movie doesn't fall under either fastest completion or full completion, it's considered as an additional branch and thus needs to be considered accordingly. I think this is a great choice for an abitrary goal, since it allows to showcase much more contents compared to the two main branches, while the ruleset is well defined and sensible: getting everything that can be obtained in the game. It could be argued that this goal should include killing all enemies and maxing out the money income, but this is not applicable since any non-boss enemy will spawn again after re-visiting the same room, and the money drops still happen even after maxing out the player income.
As a side note, I have to note that the branch label "100%" is not perfectly indicative of the movie goal, as the game doesn't feature any percentage value and the game does require just the Death fight as a full completion requirement. For this reason, in accordance with feos, I'm renaming the branch label to "completionist", as it's more accurate.
Accepting for Moons as a secondary branch.
Note for the publisher: the goals for this movie should be mentioned in the publication text, due to their compound nature.
fsvgm777: Holding off on encoding it until the situation with the branch label has been cleared up.
feos: After heated discussion we agreed that when the full completion goal for a game is decided by the community to consist of maximizing several independent units, each on its own, we can't deduce such labels to "all X". If the game does not use the term "100%" for something special, compound full completion can be labeled as "100%". When "100%" means something different in the game, there should be a new iteration of discussion to come up with a name that's not "100%" and still represents full completion.
So we consider the "100%" label iconic and use it when we have to, when we can. Changed the branch back.
fsvgm777: Processing (for real).
Last Edited by admin@tasvideos.org on 1/1/2022 6:14:05 PM
Page History Latest diff List Referrers