It's Go Forward for Justice - The Game! Featuring copious amounts of luck and lag manipulation.

Sewer Sam is an Intellivision and ColecoVision game, developed and published by Interphase in 1983 featuring a guy named Sam going through a network of sewers. Sam is armed with a six-shot revolver and has to locate and destroy three enemy submarines that are hidden inside this maze of sewers. Along the way, plenty of sewer wildlife is out to get him, so those need to be shot or otherwise avoided as well.

The creation of this run is probably a lot more interesting than the run itself. Basically, most of this run is botted in order to deal with the inordinate amount of lag and luck manipulation this game has. A good 200k rerecords have been spent trying to find the fastest way to navigate through the first tunnel or to find the most optimal shooting frames in the sewer levels in order to pass through with as little lag as possible, manipulating the positions and appearances of enemies so they minimally get in the way of the player character and generate the least amount of lag possible.
In the end, it all looks very simple and trivial in the run - until you try to replicate the first level and inexplicably lose 20-30 frames by the time you reach the first door for no plainly visible reason.

Gun reloading - when the gun reaches 0 ammo, it will automatically reload. This takes around six to eight seconds, depending on lag. On a few occasions, ammo is wasted to force a reload, so more ammo will be available later.
The different types of enemies encountered are:

The maze consists of eight levels, each of which has six doors leading to the other levels. All levels have the same door layout, and where each door sends you is determined relative to your current level number. For example, the first door on the left will send the player to (current level number) N + 1, the second door on the left to N + 2, the one opposite it on the right to +3, the next door on the right to +4, and at the end the left door to +5 and the right door to +6. If this number exceeds 8, the player goes to level (N + door ID) modulo 8.
The odd-numbered levels 1 (start), 3, 5, and 7 are dry floor levels, whereas the even-numbered 2, 4, 6, and 8 are wet floor levels. The submarines are randomly found on any of the wet levels - when entering a wet floor, the game randomly decides if a submarine is located in this area. If it is, the progress indicator at the top will be red instead of white.
Since the only requirement is to enter a wet level three times (with luck manipulation to ensure a submarine in each wet level), the route is as follows: start in level 1, take the first door to level 2 (submarine 1), take the final right door after beating the submarine to level 8 (submarine 2), and take the final right door again after beating the submarine to level 6 (submarine 3).
After the third submarine is destroyed, the game resets Sam back to level 1. Difficulty does not increase or change, and besides shots, lives, and score, everything is completely reset.

Since the door we need to reach is on the left hand side, enemies are dodged as well as manipulated by slightly nudging to the left at small intervals. (It is not possible to move sideways and forward at the same time). This is better than firing shots, which would cause more lag.

Wet levels lag significantly more than dry levels, and movement is slowed accordingly. Additionally, there are more dangerous enemies here. Since no more side movement is needed (and would waste time), enemies are now avoided by shooting the gun. This is both used for killing enemies, and for enemy manipulation. If a shot does not appear to hit an enemy, it's done for manipulation.
Starting to move in a direction during a submarine sequence causes a few frames of lag, so movement is largely minimized during these seconds. Rather unfortunate, because there's a lot of fun stuff that Sam could do climbing walls during these sequences, but that would slow down the run.

Before the start of the level, a bit of time is wasted for luck manipulation. The RNG is in a pretty bad spot here, as most values that would trigger the submarine appearance in this level would also cause one or two spiders to appear at the start of the level, which would require Sam to go out of the way to shoot them or lose significant time stuck in webbing. The movement here does visibly waste time, but it is still the fastest way to set up for this level.
During the submarine battle, a few shots are wasted. Even though this causes extra lag, this is pretty much a necessity in order to force the gun to reload by the start of the next level - otherwise there would not be enough shots to manipulate all the mice, spiders, and other hazards out of the way.

At this point, rats and spiders become very common, and both are sources of significant slowdown so they have to be shot or manipulated out of the way (spiders have to be manipulated out period - if they appear on screen at all they will set up a guaranteed time loss). Fortunately, at one point it was possible to manipulate a large enough gap to reload an empty gun without any enemy interference.
After the final submarine is destroyed, it just goes down...and the game immediately resets to signify game completion. It's an Intellivision game - games featuring an actual end screen or sequence were rare at this point in gaming history. 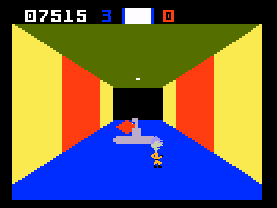 Finding an Intellivision game with even a semblance of an ending (rather than just repeating increasing difficulty) proved a challenge in itself. Not that none exist, but those that I found would have other issues that didn't really make them suitable for TASing for me at least. So, I ended up with this game instead!
Thanks for watching!
Memory: Claiming for judging
Memory: Appears optimized given the luck involved and the lag.
Appears boring given the lack of much of anything happening. Audience feedback is not great either.
The game has a clear ending by Intellivision standards (resets after 3 subs).
Accepting to Vault.
feos: Pub.
Last Edited by admin@tasvideos.org on 1/1/2022 6:14:05 PM
Page History Latest diff List Referrers