This TAS completes Advanced Dungeons & Dragons: Treasure of Tarmin in some ridiculous time of 56.592 seconds. Considering my best speedrun of Hard took 17.5 minutes, this proves just how important the luck factor is in any playthrough of this game.

(Link to video)
Objectives
Difficulty This TAS completes the game on Hard difficulty, which means the player must descend 12 mazes before they can face the Minotaur and grab the Tarmin Treasure.
Two Controllers Using two controllers in this run makes item inventorying twice as fast (0:45 in the video is a great example).
Basic Information
Chambers 1-9 Nothing important to do here; I just manipulate the exit ladder to be as close as possible, and without having to go through any doors.
Chamber 10 In all overworld maze layouts, you are forced to cross to the other side of at least one chamber, which was done here (see map below, path taken is in red). Unfortunately, I could not find an optimal scenario with no doors in our path, so opening one door loses a little over a second and a half. However, chamber 11 received a great layout as a result... 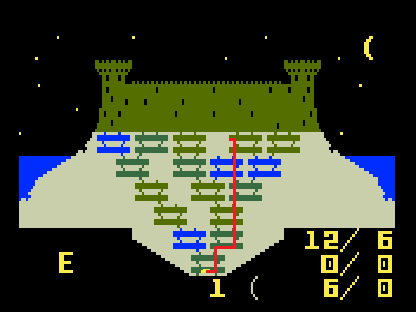 Chamber 11 Teleport Book (blue): Using this book allows you to phase through walls and is a TAS essential for obvious reasons. Teleport speed is also faster than walking speed, so this will be the main means of travel for the rest of the run.
Having a blue coin belt spawn in our path of travel, and dropping a Teleport book after negligible luck manipulation was a huge help, as the Teleport book is a pretty difficult item to find. This means no navigation around walls or through doors is required at all on chamber 12.
Chamber 12 Midas book (purple): Using the Midas book turns any weapon or armor on the floor into platinum, the highest level.
This is an EXTREMELY rare item -- even with TAS tools, finding an opportunity to make a container drop the Midas book is absurdly difficult. However, I was able to force a drop without even having to lose time. This was done by simply picking up the container, carrying it around, and not opening it until the RNG advanced to the Midas book.
Armor: A gold breastplate (26 defense) and a leather hauberk converted to platinum through the Midas book (15 defense) gives us a total of 41 war defense, which is pretty much the minimum defense we could have when facing the Minotaur with 12 HP. Spiritual defense will not matter for the Minotaur fight, as explained later.
Weapon: Using the Midas book on a silver crossbow transforms it into platinum with 99 attack, which comfortably defeats the Minotaur in just two turns.
Minotaur: In Medium and Hard difficulty, the Minotaur will use either a war or spiritual weapon, crippling the player's war or spiritual staminas, whichever is lower. If they're equal, as in this case (spiritual stats need to be multiplied by two), the Minotaur will only use war weapons. Since we previously focused all our efforts on war defense, we can absorb the absolute minimum amount of damage. The Minotaur's stamina, defense, and attack level vary wildly from frame-to-frame; by carefully selecting the frames we attack on, we manipulate the Minotaur into a very weak attack, leaving us with only 1 HP to spare.
Route taken in Chamber 12: 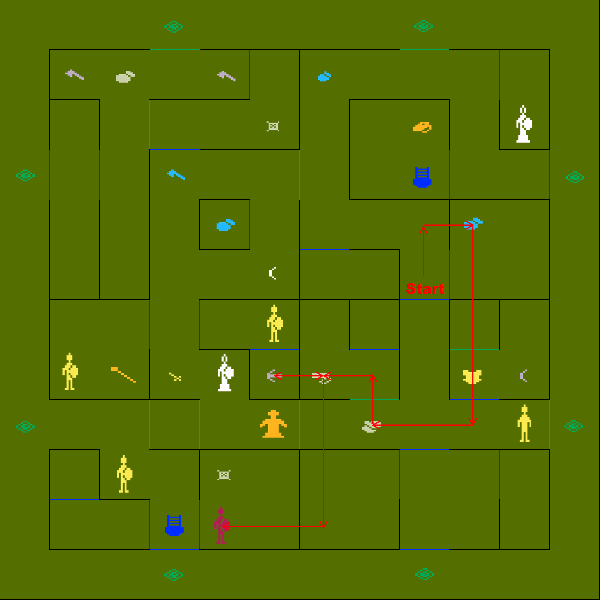 Possible Improvements? Definitely. This TAS is so dependent on luck manipulation that I can't conceivably try every scenario. I'm comfortable with stopping here because chambers 11 and 12 had extremely lucky layouts and outcomes compared to the majority which were plain crap. So feel free to take a look, cause I think this TAS still has much potential.
Suggested Publication Notes Treasure of Tarmin was the second licensed AD&D videogame on the Intellivision. The gameplay involves exploring a series of randomly generated mazes searching for weapons, armor, treasures, and magical items to battle a wide variety of monsters RPG-style. The game was released in 1982, meaning the 3D dungeon crawler perspective was very innovative for its time.
In this publication, TheWinslinator uses an absurd amount of luck manipulation to breeze through the 12 chambers, defeat the Minotaur, and collect the Tarmin Treasure in under a minute.
Suggested Screenshot Frame 3246 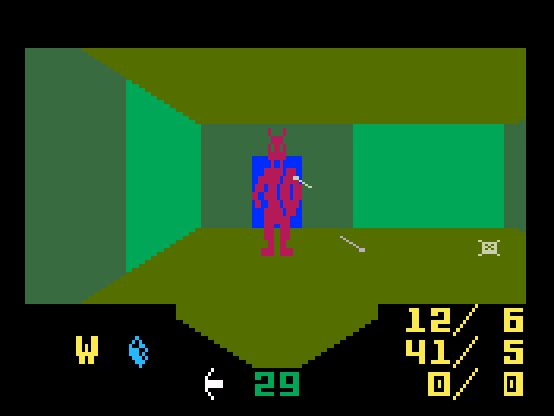 Memory: Judging
Memory: Optimization seems good.
This is game has a very clear ending, something that is rare for Intellivision standards. The game does not even accept any input after defeating the Minotaur.
Unfortunately the movie is fairly repetitive despite being less than a minute long. The audience reception wasn't too great either.
Accepting to Vault.
Spikestuff: 🐉
Last Edited by admin@tasvideos.org on 1/1/2022 6:13:55 PM
Page History Latest diff List Referrers