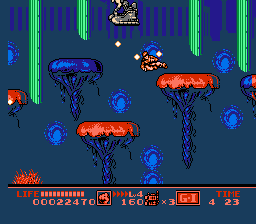 Watch
G.I. Joe: The Atlantis Factor is an NES game released by Capcom USA around 1991. It is known to be a sequel to the original G.I. Joe NES game released a year before. Unlike the original game, this one allows you to take multiple routes to the end. Completing some stages will unlock other characters you can use to make the game easier. However, speedruns will just use the shortest route to the end and stick with the default character, General Hawk.
Alyosha improves the previous run by 25.08 seconds, thanks to overall better optimization and lag management.
The baseline tab shows the default movie beating the game as fast as possible without any special conditions.