Digimon Sapphire is a bootleg platforming game developed by Taiwanese bootleg game developer Vast Fame (known for games including Zook Hero Z, Rockman DX3, Devil Island, and Zook Man ZX4).
Throughout its existence from circa 1998 to 2003, Vast Fame developed various Game Boy games and a few Game Boy Advance games. Most of their games are either platform games (generally heavily inspired by Mega Man games) or role-playing games (generally inspired by Pokémon, often taking after Digimon). This game is a clear example of the latter.
Vast Fame games are generally known for being relatively high quality for unlicensed developers, with original stories, reasonably solid gameplay, and surprisingly decent music (helped by the fact that they took the sound engine from Mega Man V for many of their games). They are also known for their rather spotty grasp of the English language, for any games they made English versions of.
Digimon Sapphire actually is a legitimately decent game, with nice visuals, a decent chiptune soundtrack and reasonably good gameplay. It's a fairly straightforward platformer, where you walk around, jump around, fire projectiles at and jump on enemies to progress through eight worlds consisting of three stages, with bosses awaiting you at the end of the second and third stage of each world.
The game has three playable characters: Agumon, Veemon and Guilmon, the respective partners of the main protagonists Tai/Taichi, Davis/Daisuke and Takato of Digimon Adventure, Digimon Adventure 02 and Digimon Tamers respectively. Each of them are completely identical aside from having different sprites and their attacks having different sprites (Agumon and Guilmon fire fireballs, Veemon a V-shaped projectile). In fact, it's possible to hex edit one input at the start of the run to change the selected character (without costing any time), and the run will still sync just the same. So character selection is really just preference.
Besides jumping and shooting, the Digimon have the ability to Digivolve temporarily into a larger, fully invincible Digimon. Oddly, all three playable Digimon Digivolve into WarGreymon. Unsurprisingly, the pirate game remains pretty loose with canon.
On the subject of canon, this game hardly has much of a plotline. It's really just Agumon/Veemon/Guilmon going on a rampage throughout lots of colorful stages. The only dialogue featured is that of the bosses, but...it really does not help all that much.

This is an improvement of the published movie. Besides general gameplay improvements, there are two key differences: one is the usage of a different ROM, a newer dump (that was dumped in 2016) that is unmodified from the original, unlike the previous dump, and which resolves an issue that the previous ROM had, where the game could crash or play the credits after every stage. Thanks to this difference, there is no longer a need to reset after every stage, saving 198 frames on every instance where this occurs. It should be noted, however, that frame rules are different due to the lack of resets, so additional frames can be gained or lost because of this change.
Also, this run uses the mGBA core instead of the older VBA-next core used in the previous movie. In particular, this time it is required to have the BIOS screen visible on startup and on reset. As such, this movie loses 273 frames at the start.
Disregarding the differences caused by the ROM and emulator, this movie saves a total of 1844 frames in gameplay time from the published run. More details on this are listed below.

A simple trick that allows for a lot of little skips and many bigger spiks as well. By jumping one frame after firing a projectile in mid-air, it is possible to jump in mid-air. This can be easily and infinitely repeated as well, allowing for practically free aerial movement.

This is less a trick and more just abuse of a property of the Digivolved form that it ignores ceilings in collision. Normally this makes no big difference, but combined with infinite jumps it means some vertical sections are traversed through faster by Digivolving and just plowing through the platforms like they aren't there.

A very convenient trick which allows me to reduce the majority of bosses to paste in mere seconds.
How it works: most bosses spawn projectile objects of some kind to attack. Normally, when you hit them (either by jumping on them or hitting them with a projectile, like any normal enemy), the projectiles are "killed" just like other enemies, complete with dropping a pickup. However, for some reason, if the boss is invincible and its projectile is it, the projectile won't die but the boss will take 1 damage instead, bypassing the boss' own invincibility.
Thus, most bossfights come down to waiting until the boss fires a projectile, then whaling at it with dozens of hits at once, typically near-instantly killing the boss. The only real exception to this is Wormmon (2-3), as he is the only boss with no projectile attack whatsoever.

Imagine you are TASing your typical boss fight in your typical game. You find a way to defeat it one frame faster. Typically, in most games, this results in an one frame gain across the whole run. Some other games have these annoying things called frame rules, where the one frame gain you had on the bossfight gets negated later on.
In this game? You actually end up losing one frame, in most cases. There are some interesting mechanics around the waiting time until the level fade-out screen happens at the end of a boss battle.
When a boss reaches -1 health and "dies", the following happens, in sequence:
This combination of timer requirements means that there are some interesting ways to optimize the final time that don't involve simply beating the boss faster.
In short, it is faster to kill a boss on the last frame of invincibility, just before the timer resets and the boss becomes vulnerable again. This can potentially save up to 51 frames on the fade-out time.

The game has a global timer at RAM address 0x1D84, which simply counts up by one during every non-lag frame. It persists during stage transitions, but not during resets, which makes it impossible to compare with the timer itself from the previous run.
The global timer affects various things:

There's a very subtle issue when walking up a slope where sometimes movement stops for one frame on a slope. For the old run I never noticed this issue - this time, I took better care at spotting these issues, saving frames here and there. In the improvement chart, "minor optimizations" often include frames saved thanks to this.

Doing a pixel-perfect precise jump into a corner wall, it's possible to clip a few pixels into the corner. This process can be repeated to enter incrementally deeper into a corner, eventually resulting in either the player getting stuck or falling through the wall. This takes some time to set up, so usually isn't that useful, but it did open up for instance a significant time-saving clip in World 2-1. 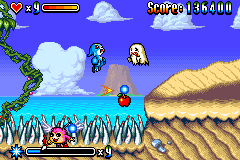 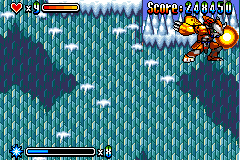 As extra supplementary content, I ripped the game's soundtrack. If you liked what you heard throughout the movie, you can access the original soundtrack playlist of Digimon Sapphire here.
Thanks for reading and/or watching!
ThunderAxe31: Judging.
ThunderAxe31: Accepting as improvement over the published movie.
Spikestuff: Publishing to publish!
Last Edited by admin@tasvideos.org on 1/1/2022 6:14:05 PM
Page History Latest diff List Referrers