Welcome to this TAS of Linux.

It's possible to press two or more keys at the same time. Contrary to popular belief, keyboards don't collide typebars together causing a jam. This is due to keyboards not being typewriters.

By using horizontal and vertical motions simultaneously, you can move along a 3-dimensional hyperplane. Be careful of space curvature messing with Euclidean geometry making it harder to position the mouse correctly.

The SSD wasn't invented yet, so instead the almost 2 minute boot was shortened in the encode by removing duplicate frames.

We save frames here by skipping the memory test and utilizing the Hard Disk Detection Skip.

This trick was found in the early 1980s, and has saved a lot of time during the decades. 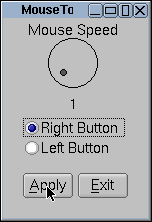 Reducing the mouse speed increases the precision we need for pixel perfect clicks. With a maximum movement of 255 units per frame, this comes at the price of not being able to reach the whole screen in a single frame. However, this is rarely needed, so the increased precision is worth it.

If you played around with timetravel before, you have probably noticed how easily errors in causation can appear. By carefully manipulating time we can jump to 1933, preparing the timeline so that time saving tricks are discovered earlier.

Minesweeper is a game about navigating blocky terrain while dodging explosive dangers. It was named after a similar game called Minecraft.

This version of the game is for people who decide the four-player game "mahjong" has three players too many.

Chess is the game where you know the rules until you don't. The opening used was the true version of the Queen's Gambit, where instead of sacrificing a pawn, you sacrifice the queen piece itself.

Prime numbers are primarily known for their factorization purposes. The lesser known feature is their ability to slow down chess computers due to them stealing computing time.

The sdfsdf command is well known. Its effects are variable due to the permanent state of confusion in the system at every point of time.

Noxxa: Claiming for judgment.
Noxxa: As enjoyable as this movie is, I noticed one major flaw. The movie does not actually beat Minesweeper. Therefore, instead of giving it a Star, I can only give it a SadTux.