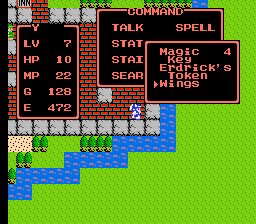 NES Dragon Warrior by RationalMonkey in 16:59.57

Watch
Dragon Warrior is a seemingly complex but ultimately fairly simple NES RPG. The character completes his quest at Level 7.
In this eighth published movie of the game, RationalMonkey saves 00:13.39 seconds over the previous run, mostly by using wings in Rimuldar rather than a deathwarp. See the author's comments for details. There are several things about this movie that might seem odd if one is not aware of them beforehand:
The baseline tab shows the default movie beating the game as fast as possible without any special conditions.