: Samsara : Zinfidel
Submitted by Winslinator on 7/25/2020 3:47:35 PM
Download Discuss and Vote Back to Queue All by this submitter

In BurgerTime, you are a chef who must walk over giant hamburger toppings to send them to lower floors, eventually forming complete burgers... but watch out 'cause the kitchen is pissed! Hot dogs, eggs, and pickles will chase you around the stage to foil your plans of being a fast food wizard.
Luckily, these baddies can be crushed by dropping toppings on them as they pass underneath. If they are standing on the same topping you send down, the toppings will descend two floors which is much faster. You can also stun enemies for a short time with a pinch of pepper.

(Link to video)
Objectives
Difficulty The hardest difficulty is simply the fastest game speed, which was selected here.
Giving the Baddies a Ride
This is what the instructions manual calls it when an enemy is on the same topping you drop--the topping and the enemy will drop two floors together. This is obviously much quicker for most situations, but if enemies are too far away or it is a special case, we opt for a one floor drop. Note that giving multiple enemies a ride at once does not increase the number of floors dropped--the maximum is still two. Previously not thought possible until this TAS was being able to give baddies a ride when they come up or down a ladder right into the middle of the topping. We can do a little wiggle to move out of the enemy's way and delay walking over the last section of topping just enough to drop it right as the enemy steps on.
Pepper
Pepper is extremely useful in this TAS for taking shortcuts through or freezing enemies on toppings we wouldn't be able to give rides for as readily. You start with four pinches of pepper, but there are items that give you more... often in out-of-the-way spots. I never walked more than two extra units to grab these, so the timesave was well worth. Seven peppers were used in this run.
AI Manipulation
All enemies track your position in the same way but with one important distinction: When the chef and an enemy's Y positions are equal (regardless of X distance), hot dogs always move down ladders while eggs and pickles always move up ladders, provided they encounter one. If you ever see me take a random tangent for seemingly no reason, this is to manipulate some enemy's path to get a better pattern later on.
Luck Manipulation
When getting crushed, enemies can respawn from one of five locations on each map, determined randomly. When taking a ride, enemies don't respawn at the map margins. Instead they resurrect at the point they were dropped to and will initially start walking left or right, determined randomly. Respawn location and walking direction is dependent on when they were crushed or given a ride. In several places, I wait longer than necessary to do these actions in order to get a more favorable outcome later on in the stage.
The frame the stage begins affects the timing of when the first enemies walk from the level margins. Delaying the end of a previous stage can therefore be faster in the long run.
Level 1 There are two key AI manipulations:
Level 2 Various manipulations were calculated such that towards the end of the level, every enemy was used to send toppings down two floors.
Level 3 The fastest route I found was to drop the left two burger toppings to the bottom floor on the first pass. From there, everything just seemed to fall together. A slight delay at the end of the level gave better RNG in Level 4...
Level 4 Ending the previous level late allowed the bottom-right hot dog to spawn later, meaning I could lure him upwards at the beginning. This let me use one less round of pepper in this very straightforward level.
Level 5 There are two key AI manipulations:
Level 6 Pretty robust routing here. Three peppers were used in this level and each helped give a ride to enemies that would've otherwise been impossible.
Level 7 I found this route for my RTA runs over a year ago and it looks like it holds up for being the best TAS route too! Due to the disjointed nature of the level, finding a better route will be very difficult.
Suggested Screenshot Frame 12979 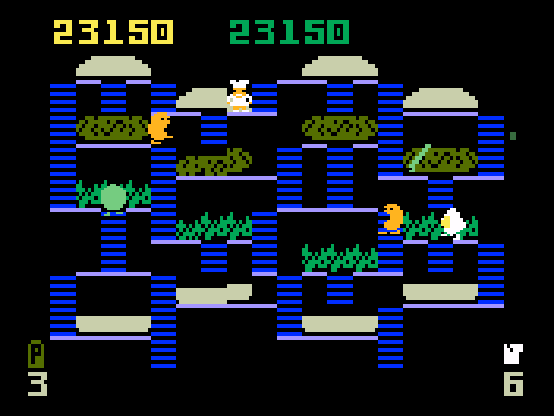 Suggested Publication Notes
Insert first two paragraphs in these submission notes here
Winslinator completes one loop of the game's seven stages in record time.
Memory: I think I can stomach one more loop of this game (having judged the NES version) to judge.
Memory: Optimization looks fine.
There were some major concerns with this submission not beating the game. This TAS beats one stage layout loop, however, the difficulty appears to have a fixed increase point (up to 7 loops). According to the rules, difficulty doesn't count as content only if it rises indefinitely. Most people seemed to agree with this restriction as well! I was fully expecting a discussion about whether or not this should be the case but most people seemed to agree it should. As such this movie's next end point would either be after the last difficulty increase or a killscreen if one were to exist. So far the author was unable to beat one of the levels in loop 7 but this may not be a proper killscreen. If it is truly unbeatable, it is a kill screen.
Rejecting.
Samsara: Unrejecting and re-judging in light of a rule change regarding difficulty in looping games.
Samsara: Optimization and routing look solid. The differences in looping appear to be difficulty only (changes in enemy speed and behavior, no new content), thus now making this submission eligible for publication. Given the mixed feedback after un-rejection (and relative lack of feedback prior to the original rejection), I am accepting this to Vault.
To clarify the new rule a bit further: Maxing out difficulty is now just a preference as opposed to a requirement. A movie that completes all 7 loops (or reaches the possible killscreen in the 7th loop and confirms that it is in fact a killscreen) would obsolete this run assuming it is up to the same standards of optimization, but we are no longer rejecting runs like this for being "incomplete". This rule change only applies to looping/infinite games, games without defined endings in general. The rules for difficulty have not changed. If you have any further questions about the rules, ask a Judge in this incredibly handy and well-named thread.
Man, this feels overly formal for a Samsara judgement. This was interesting! Excellent work! How about a joke about butts? Okay, there, I think that knocked out a row on the bingo board. I feel comfortable now.
Zinfidel: Processing...
Last Edited by Zinfidel on 1/20/2021 6:42 AM
Page History Latest diff List Referrers