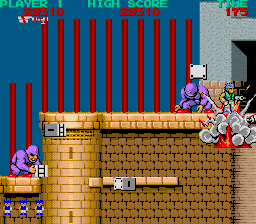 Watch
Before reminiscing about a man I knew when I was young, before rescuing a hero named Joe, there were games where you played as Joe himself! The Bionic Commando arcade game, sequel to Commando, introduces the first hero in a platform game who couldn't even jump, which spawned many sequels.
Thanks to collecting an item that increases the speed of the bionic arm quite a bit, abusing death to skip the elevator in Mission 4 and better overall optimisation, Jules improves the previous publication by 38.85 seconds.
The baseline tab shows the default movie beating the game as fast as possible without any special conditions.