Zemina's fourth take at a platform game on the Sega Master System which definitely has no relation to Super Mario Brothers. Super Boy traverses through 16 levels and a couple bossfights in order to rescue what is definitely not Princess Toadstool.

Super Boy 4 is a platforming game exclusive to the Sega Master System, released by South Korean company Zemina in 1992. It is the fourth and last game of the Super Boy series, and the only one exclusive to the Sega Master System (all previous ones also were released for MSX).
The game contains 16 stages, loosely divided by 4 worlds, and a final boss stage. In each stage, Super Boy has to reach the end of the stage and break a special block which contains a gem that ends the stage when collected. Along the way, various enemies and hazardous stage layouts (that definitely were not ripped straight from Super Mario World) try to prevent Super Boy from saving the princess.

This game lags a lot, in two different ways. For one, input polling is not consistent, and regularly, input polling is skipped for a frame. Naturally, this makes doing some precise jumps a massive pain. It also has conventional slowdown lag whenever more than a few enemies are active on screen - a large part of optimization is keeping this lag down by stomping on enemies.
Lag optimization can be very tricky or counter-intuitive sometimes - for example, near the start of stage 13 Super Boy bumps into a wall on purpose just because it saves more frames from reducing lag frames that way.

Most enemies in the game can be jumped off in order to defeat them. This is often done to cut down on lag. A notable issue however is that there is no control of jump height after jumping off an enemy - Super Boy will always jump to the maximum height. This is a problem when jumping off an enemy often sends you off into a pit further ahead. Sometimes some compromises have to be made to

Running physics are quite weird in this game. There's a distinct difference between whether movement will make the camera advance or not; if it does, then Super Boy goes forward at a consistent 2px/frame. If not, some acceleration is involved before maxing out at 2px/frame. Turning around is likewise dependent on player position relative to the camera; if the player is at the camera "boundary", trying to reverse position will immediately put Super Boy at a full stop, but he won't start moving into the other direction until he has finished "decelerating" his momentum from the direction he was moving towards, which takes a long time. Otherwise, he will decelerate as normal (albeit still rather slowly).
Basically, it does not make a lot of sense.

If Super Boy jumps into the corner of a solid block, enough that it isn't detected as outright hitting from below, he will be ejected out 3 pixels. Sometimes this can be applied for consecutive frames, allowing a 6 pixel boost. Finding places to apply corner boosts is a key part of optimizing movement beyond just accelerating to maximum running speed.
Corner boosting can even be done off invisible blocks - scouting out for invisible blocks that could be helpful for any purpose was an important aspect of making sure no opportunity for saving frames was missed.

Normally, falling into a bottomless pit kills Super Boy. However, having a specific vertical speed and positioning, achieved from doing a short jump from a bottom-most possible tile, will cause Super Boy to not die, but overflow position to the top of the screen instead. This is used in a few stages to skip some stage geometry.

In the final stage, there are two boss enemies, which must be defeated to progress in the stage, as otherwise progress will be blocked by large walls that normally cannot be passed. However, through floor overflow these walls can be bypassed anyway, rendering the requirement to actually defeat the boss enemies moot. 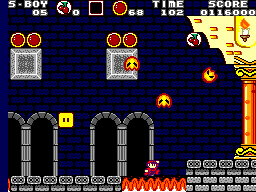 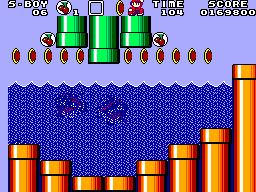