This TAS completes Advanced Dungeons & Dragons (Cloudy Mountain was later added to the title to distinguish from the sequels) in some ridiculous time of 11.465 seconds. Considering a casual playthrough takes like 10 minutes, I couldn't be happier with the result.

(Link to video)
Objectives
1-Frame Improvement I saved a frame just by slightly changing the timing of when I press the 0 key to count arrows. I have no idea why or how pressing that key at certain points saves you lag frames. It just does.
Difficulty The game was played on the hardest difficulty, which the manual calls "Hero" difficulty. Using any of the other three difficulties would not have made this any faster.
Using Two Controllers Intellivision controllers were programmed very poorly. You might think having 15 unique buttons per controller could lead to a wide range of options, until you realize that only 1 of those 15 can be pressed at any given time. That is horrid. Luckily, the Intellivision supports the use of two controllers in this game. So now we can press a WHOPPING two buttons at the same time! Two spaces can now be moved at once on the overworld map, and picking up items or shooting arrows can both be done while running.
The Corner Skip Go to position 21 on the map (refer to image below). For some reason, there are designated coordinates for spaces outside the playable area, and one of them, position 0, happens to be passable (reasoning in the next paragraph). Therefore, we are able to enter this out-of-bounds region by moving up-left. Moving up-left again from here causes an underflow of 21 units to position 235 (0=256; 256-21=235). This happens to place us inside the river, which is supposed to be impassable, but we can still progress by simply moving up-right to position 216. Corner Skip is not optimal on the majority of map layouts, so I had to advance RNG for 3 frames to get an agreeable outcome. All map values are derived from RAM address D3. 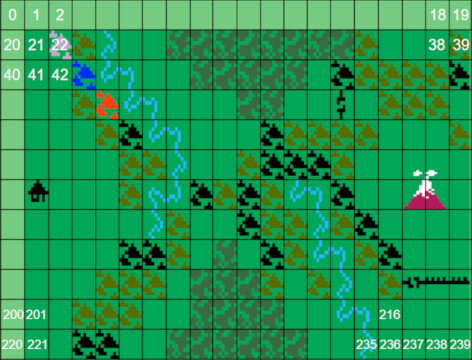 Position 0 is passable due to an oversight in the behavior at RAM address 34. Address 34 controls the intended gameplay aspect which restores the playability of a specific mountain, but only after playing through four others. Address 34 is originally assigned a value of 0, becomes 121 (the "home" coordinate) after playing through three mountains, and after exiting the fourth mountain, the address will change to whatever the coordinate of the first mountain you entered was (after exiting the fifth mountain, it will change to the coordinates of the second, and so forth). The purpose this serves is every time the value changes, the collision property of the previous coordinate value will change from passable back to default.
Since address 34 is originally assigned a value of 0, you're allowed to pass into coordinate 0 and perform the corner skip. When the address changes to 121, however, the original properties of coordinate 0 (impassable) are restored, and is hence why the corner skip will not work once you have passed through three mountains.
The First Mountain All we want to do is just get to cloudy mountain, so we've got to find the exit ladder here ASAP. By looking at RAM addresses AA and AB, we'll know immediately whether or not the snake guarding the ladder is in an adjacent room. Since the player's starting location is (0,0), and the caves are an array of 4x4 rooms, this means the three adjacent rooms are (1,0), (0,1), and (0,3). In this movie, AA=0 and AB=3, so the snake's location is (0,3) in the room directly above the player's spawn location. We then ambush the snake and grab the ladder right under his nose. 4 frames of RNG advancing were required to get this agreeable outcome.
Corridor Curvature Each room we visit can be one of eight possible shapes, as shown by the image below. The preferred room type is any which has a straight connecting corridor in the direction we're travelling. All the connections highlighted in red are bad, as they are curved and therefore waste too much time to traverse. Luckily, the majority of connections is straight, so getting good corridor RNG is more likely than not. 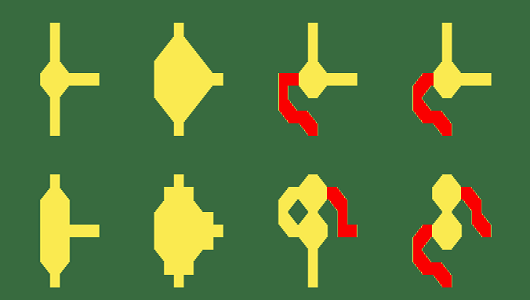 Cloudy Mountain All we need to do is find both pieces of "The Crown of Kings", each being guarded by a winged dragon, and we win. The first dragon we encounter must be killed using all three of our arrows; otherwise, escaping death is impossible. The optimal cave layout required here is absolutely absurd: both dragons must be adjacent to each other (RAM Addresses 9E,9F,A2,A3), one of which must also be adjacent to room (0,0) AND all of the connecting corridors must be straight. Of the literal HUNDREDS of scenarios I've tested, the one you see in this movie is the only scenario I've found to meet all three criteria at all.
It should be noted that cloudy mountain can actually be entered from the left or the right side on the overworld map. While the placement of enemies and objects doesn't change between the two sides, the room shapes do. As a result, we're given two chances to have good corridor RNG, given that dragon position is optimal when entering on that frame.
Suggested Publication Notes
"The gameplay of AD&D: Cloudy Mountain involves exploring a series of randomly generated mazes, searching for tools or arrows with which to progress on the overworld map, or to defeat monsters. The end goal is to reach Cloudy Mountain and recover the Crown of Kings from the fearsome winged dragons!
Winslinator uses a major skip, two controllers, and substantial luck manipulation to tear through the game's content, only visiting two mountains in the process. He improves the previous publication (http://tasvideos.org/4142M.html) by 1 frame (0.017 seconds), thanks to better lag reduction.
If you're itching for more Advanced Dungeons & Dragons we also have a run for the second title Treasure of Tarmin."
feos: Accepting over [4142] INTV Advanced Dungeons & Dragons: Cloudy Mountain by Winslinator in 00:11.48.
Spikestuff: Publishing with content provided by Samsara.
Last Edited by on 1/1/2022 6:14 PM
Page History Latest diff