I'm gonna level with y'all here. I have no idea what I did in this run.

Just to clarify in advance in case it comes up: The RTA time of this run is 14:09.57. RTA runners include the full credits sequence in their runs, ending as soon as "END." fully appears on screen. No input is required during the credits, so it is excluded from the input file.

Brief Summary Of The Stuff I Understand

The game starts off with a weird dream sequence-y thing, where the initial three heroes are named and set up. They're generally referred to as the Protagonist, the Law Hero, and the Chaos Hero. The names I put in (Sonia, Ra, Kaosu) are just for fun, the only time wasted is the time it takes to enter them. Slightly more important is the stat allocations: I pump some specific stats to set up for the stuff I don't understand later. The stats might not actually matter too much in a TAS, but since all stats have to be allocated anyway, the worst case scenario is I lose an extremely small handful of frames pumping up the "wrong" stats.
I get attacked by a Gaki at the mall, or a Preta if you're more familiar with modern SMT, or "is that the one with the tiny penis" if you're nasty. After the "fight", I get an Attack Knife that I immediately sell three times using the shop glitch. Shop glitch is... Strange. I'll go into it a bit more later on. For now, just remember that it lets us sell infinite Attack Knives. I pick up some Headgear and heck off back home, I'm due for another weird dream sequence-y thing after all. In this one, I get to name the Heroine! Since "Ms. Not-Appearing-In-This-TAS" doesn't fit, I give her the usual "A" name and allocate all of her stats as quickly as possible.
It's time to wake up and take drugs from a stranger sitting in a park. They're so good that I astral project straight into a building. All of the movement during these dream sequence things is automatic, so that's why it looks slow and bad. At the end of this acid trip, we "fight" Douman for a single round. He's a boss slightly later in the game! "Slightly later" is too late for this run, though. Post-trip, we pick up a Hamaya and a Nyoizou from the Kaifuku, like normal people always do on Wednesday nights. Speaking of things that happened to me on Wednesday night, I get arrested and imprisoned after this.
Ra is picked up for the first time in the real world. He proceeds to slam jam a Hamaya (equivalent to Megido in later SMT games) down the first real boss's throat, and we leave the building. Back at the mall, we pick up Kaosu, because we're in dire need of a glitch to happen and he's the only one that can help us. After getting him, we sell a gun at the drug store and buy some curses from the secret menu. No, really. The "secret menu" is the shop glitch again. The glitch is weird in that it essentially gives every shop an extra item you can buy. Here, it's a Hikoubari, which I believe is akin to Mudo in later SMT games. I buy three of them, intending to put them to good use.
Outside, I dance around a bit to manipulate a specific enemy and a specific battle outcome. Namely, I use the Hikoubaris to kill off my party as quickly as possible by, I believe, reflecting them off of the Ghoul. Kaosu uses the Nyoizou before the Hikoubari, though. The Nyoizou is a Chaos-aligned insta-revive, which leads to...

Brief Summary Of The Stuff I Don't Understand

Kaosu is still dead, but is also alive, and the game doesn't really like that a whole lot. Going back into the mall, I open the menu, scroll down precisely 118 times, and for some reason we get thrown into another dimension. Navigating this dimension is finicky, you'll often run into errors and warps to different weird hell dimensions by going off the path. I want to get to a specific spot to scroll down 118 times again, which leads to a DIFFERENT hell dimension, but one where all I have to do is hold forward in order to beat the game. Law Ending achieved, completely legitimately.
You can probably tell this is just heavy optimization of the RTA route by now. I have genuinely no idea what I did, and any relevant explanation is going from originally being in Japanese, through Google Translate, to my eyes, into my head, and is coming back out as mostly screaming and bees flying out of my mouth. Basically, memory values get overwritten, it leads to weirdness. From what I can gather, the Headgear is what allows for the weird map OOB stuff by overwriting values used for the player's direction, and the actual map is affected by things like the Heroine's name, though these map changes are minor at best, and brute-forcing an "optimal" map from the Heroine's name would be so far out of my comfort zone that it's being welcomed in a neighboring universe.
I highly recommend this commentated RTA run from niconico_masaya, along with their SMT Lab site (link should go straight to the explanation of this glitch) for much better information about what happened, as long as you understand Japanese or are smarter than me (i.e, nearly all of you).

Some of you may remember that I attempted TASing a previous route for this game about a year ago, and progress on that was stalled by some insane RNG manipulation that I didn't understand at the time and continue to not understand to this day. Thankfully for my sanity, this "new" route (it's actually several months old and I just missed it until recently, shhhh) is not only much faster, but it removes that massive RNG barrier. The only RNG in the run is just from avoiding getting into encounters and manipulating the last battle to be as fast as possible. With the rest of the run being primarily text and basic movement, this was a short, fun, almost easy TAS to do.
Can it be improved? Almost certainly, but I can't really do that myself. I'm just going to remain here as an example that you can be both a complete idiot and an accomplished TASer at the same time. 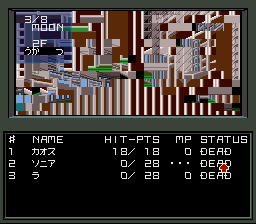