Speed not score, but all events played so to explain what I'm on about.
2 stages 大きり 事は いいことだ (Larger Number) and いまだ！ トンズラ！ 大脱走！ (Great Escape!) both fail to max score.
One requires getting dead on 50 to score full marks whilst the other requires you to cross 10 times...
Now it would've been fine and easy enough to deal with Larger Number's issue by sacrificing a choice with the AI. However, the same AI are quite good at getting themselves shot in Great Escape, due to this I decided to focus on speed instead.
2 more stages were hit cause of the speed focus, both are in the Track & Field events; Javelin Throw and Long Jump.
And the stage which has GuitarFreaks and DrumMania can actually be failed as the requirement is to clear it without losing all life so I did.
On the topic of Track & Field if you look at the other submission and the four events here you'll notice that the running events are half the length in this submission compared to the other.
Single Player in MY Bishi Bashi?
Yes.
Alright, carry o-- WAIT A MINUTE.
Right to explain this one.
If scores are leveled between events a who's the fastest would pop up, this wastes time: 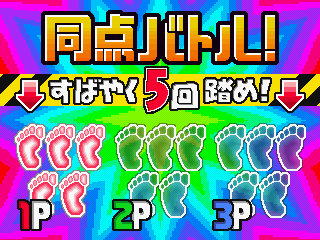 So obviously multiplayer wasn't used as then I would have to deal with lives.
And just like last time Normal Difficulty was submitted cause it was faster than Hardest. If Judge wants to change my decision on this one, the userfile is here.
feos: Claiming for judging.
feos: Delaying per author's request.
Last Edited by Spikestuff on 1/19/2022 3:51:51 AM
Page History Latest diff List Referrers