you can take everything from this explanation out of context
heres the encode:

Welcome to Pepsi Invaders-- Space Invaders but you fight letters that spell out the word "pepsi" on screen because this is how desperate corporate marketing is. 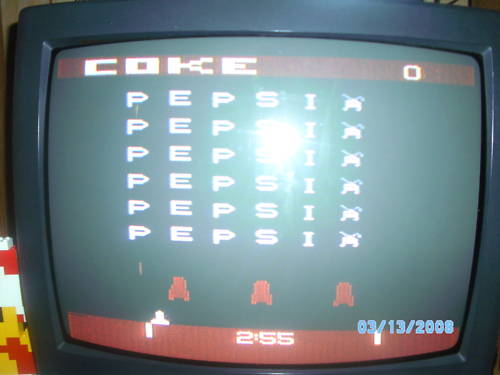 Me explaining the tas

For this TAS and alike other speedruns for games similar to Pepsi Invaders, such as Breakout, the primary goal is to destroy as many objects as quickly as possible.

The reason I dont spam rockets while moving all the way right to left and back and forth is because:

Although it does seem I'm just moving hesitantly along the screen, if you pay close attention, every turn and shot I make is frame-perfect. In this TAS, the player moves as tightly as possible when shooting an enemy while shooting at the frame that is available after the player has already destroyed another enemy while positioning frame-perfectly to shoot the next one.

Mod edit: Do not post ROM links
since noxxa removed the image and i need to pay $5/month to get it back, just pretend theres cat mario ascii art with a bunch of unfunny jokes and me for no reason calling out adelikat because comments are broken on bizhawk

so heres the new and

they arent broken adelikat, are you happy now *sniff* (dont look at the github issue i submitted)

something you dont know or care about

completely unrelated to this tas, i did the smart desicion to encode a 30 second long tas in raw format, and heres the end result

ｉｔｓ １５．８ ｇｉｇａｂｙｔｅｓ ｂｉｇ
fun fact: the site went down when i pressed submit (second time for the site being down while submitting a publication in a row) so i have to redo half of this "explanation" again. epicge

thank you ladies and gentlemen for listening to my ted talk, and have a nice day

on god im gonna get banned from tasvideos for uploading this
feos: Claiming for judging.
feos: Removed movie subtitle that broke rules regarding references to copyrighted materials.
feos: Trimmed blank input at the end.
feos: Movie Rules about optimality say:

If you're aiming for speed, your submission must match or beat all known records. Check places such as YouTube, NicoVideo, and Speedrun.com for speedruns, as well as the Games section of the forums and our site Userfiles.

Your submission does not have to be absolutely perfect and unimprovable, but it should be as optimized as you can make it. Judges will check your movie's technical quality: they should not be able to easily improve your movie by large amounts of time. All techniques known prior to beginning a run should be used.

This movie is 5 seconds slower than the human record. I counted only gameplay, since the first bullet is shot and until the last enemy dies.
I also did my own test loosely based on the RTA strat and I beat the RTA by 1 second (same measurement as above). There's most likely more time to save, I haven't checked if simply holding the shoot button fires optimally. Also probably different kill order may be better, because in a couple places I had to pause shooting.
This run waited 107 frames before starting the game for no reason.
It doesn't look like any effort has been put into TASing this movie or into prior research. Rejecting.
Also I don't know what to make of this submission text. If it was meant to be a joke, then it should have happened on April 1st, even though I don't see anything funny in it. If it was serious, then it makes judging this movie harder due to lots of irrelevant information (and distracting formatting) all over the place.
Note: I didn't notice any new content after beating the first round, so it seems to be an acceptable ending by our definition for games without an ending.
Last Edited by feos on 1/22/2022 4:56:06 PM
Page History Latest diff List Referrers