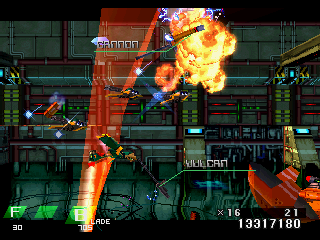 Watch
Squaresoft (now known as Square Enix) didn't only make role-playing games! They also made games of different genres. This one is a shoot'em up called Einhänder.
This shooting game has something particular compared to its siblings. Not only can the player shoot bullets, but he can also wield a sword and slash through enemies. In fact, the game's title, Einhänder, means "single-handed" in German, referring to the player's sword.
In this movie, sparky takes advantage of a glitch to abuse the weapon's attack to cause more damage. This is only possible in the Japanese version.
The baseline tab shows the default movie beating the game as fast as possible without any special conditions.