(Link to video)
Table of contents

Wii Party is a game for the Wii series released in 2010 and developed by NDcube, most known for their work on the Mario Party series. Unlike Mario Party, Wii Party features a wide set of different gamemodes for players to choose from, and if previous submissions are anything to go by, distinctions between these and minigames are not always clear cut. I'll do my best to explain the different types of gameplay Wii Party has to offer here; those uninterested can skip to the next section.
Upon booting up the game for the first time, Party Phil asserts that there are three styles of games to choose from: Party Games, Pair Games, and House Party games. Party Games are structured around 4 players, whereas Pair Games are structured around 2 players, and are primarily cooperative rather than competitive in nature. Both game styles make hefty use of minigames throughout, although it's possible with good enough luck to go through a few of these without ever encountering a minigame. 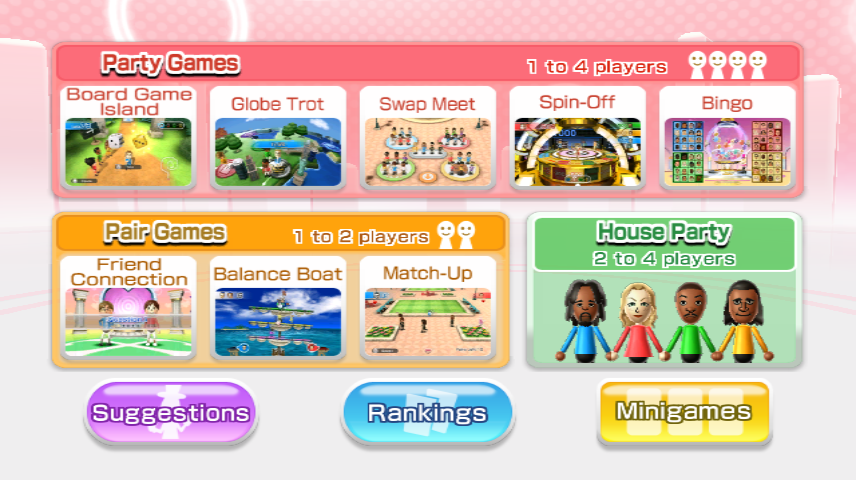 Notably, the House Party gamemodes (shown below) do not feature any minigames and rely heavily on irl social elements, such as passing controllers around, guessing the choices of other players, and even a physical deck of cards in a gamemode exclusive to the Japanese and Korean versions of the game. As a result, these gamemodes are harder to translate to a speedrun or TAS. 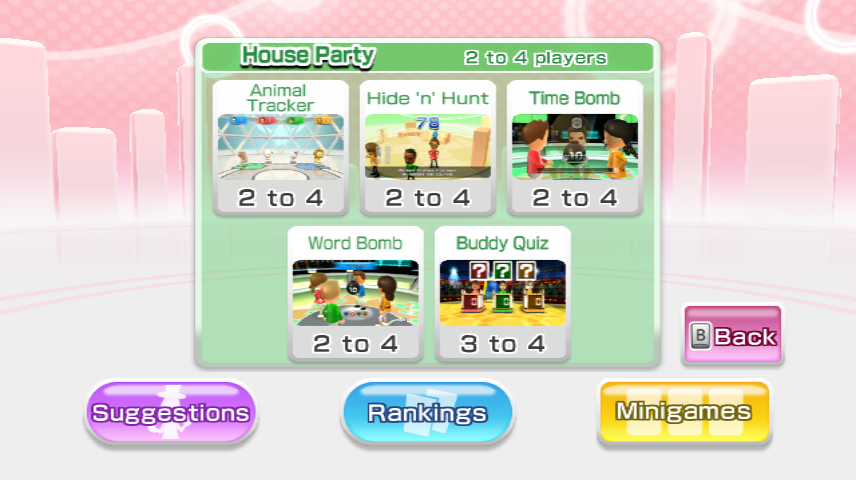 Alongside these game styles in the main menu is the Minigames section, which features a variety of minigame-centric gamemodes (pictured below), which I shall now explain individually. Free Play allows players to play any of the 79 regular minigames at their leisure. Battle has 4 players compete to come 1st in random minigames, ending when someone has won a set number of them. Solo sees 1 player compete to come 1st in a set number of random minigames without losing too many times, with the number of minigames increasing with higher difficulty levels. Challenge sees players engage in “challenge” minigames, some of which are variations of those seen in other gamemodes; goals here vary from score attack, to time attack, to seeing how long you can keep going against increasing challenges. Not shown below is Spot The Sneak, a multiplayer exclusive gamemode where a random player is given the ability to cheat in minigames, and other players have to try and figure out who it is. 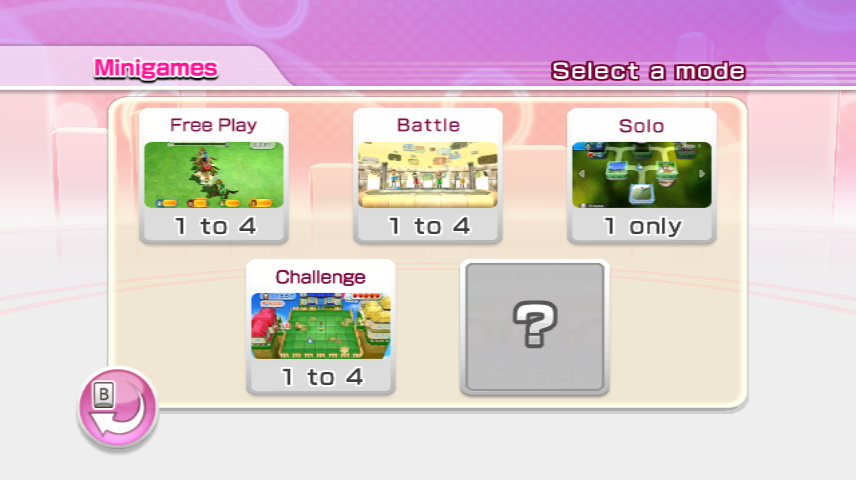 TL,DR: There are about 18-19 different gamemodes in Wii Party, each belonging to different categories in the main menu. Some of these gamemodes are more applicable to a TASing context than others. Either way, there are a large number of potential branches on offer.

Friend Connection is a cooperative gamemode that primarily acts as a platonic compatibility test between two participants. The players each answer the same five questions about their preferences (Would you rather visit Europe or Asia, etc.), and then play a random pair minigame together. Based on how close their answers were and well they performed at the minigame, they are then given a score out of 100.

Although there are 22 pair minigames in Wii Party, Friend Connection will only draw from a pool of 15 of them:
Of these minigames, the quickest one to get through happens to be Flycycle Team, in which the players can simply do nothing and fall into the ocean immediately. With the upper range of scores cut off, getting 20 points out of 100 ends up being the fastest route, as it minimizes the time spent by the platform getting to where it needs to go at the end. To do this, we have our players answer differently on every question save the final one.

When booting up Wii Party, the game seeds its initial RNG value from the lower 8 bits of the Wii’s timebase register. In Dolphin, the timebase register’s initial value is set depending on the state of the real-time clock, meaning that we can manipulate our RNG by changing the date and time.
In addition to determining what minigame we get in Friend Connection, the RNG can also produce variable loading times at four points throughout the run:
The loading time for the title screen is particularly variable, and can differ in length as much as 18-26 frames depending on the RNG. For this reason, I decided to survey title screen loading times in a total of 300 possible date/time seeds for both the NTSC-U and PAL versions, the results of which are shown below (Note: frame count on the x-axis is based on when the first letter of the logo appears, not when the loading finishes): 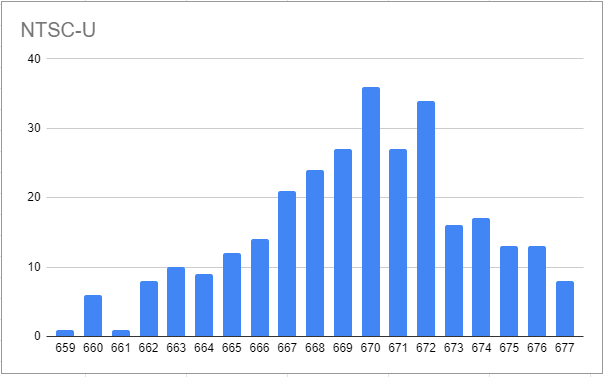 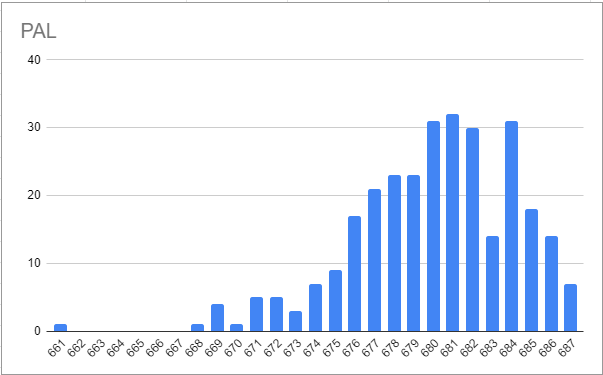 This variation makes comparing TASes of different versions without taking loading differences into account rather difficult, and as a result I decided to opt for whichever version ended up having faster load times overall. NTSC-U ended up being faster by about half a second here.
Oddly, both Party Phil’s intro and the disappointed crowd of Miis will only ever take one length of time or the other to load with no inbetween - Party Phil takes 12 or 15 frames to load, and the Miis take 6 or 17 frames to load. How and why this works the way it does is beyond me. Flycycle Team’s loading screen will only ever differ by 1 or 2 frames.
You may be wondering why I didn’t opt to test other versions of the game in my TASing (such as NTSC-J or NTSC-K), or test for other controllable variables, such as the system language and the aspect ratio. Unfortunately, SYSCONF settings are currently broken in Dolphin such that the emulator will automatically force defaults upon the player when creating a movie recording, meaning that we’re forced to use English and 16:9. The Japanese version of the game would incorrectly load up an unfinished English localisation of the game, and the Korean version of the game wouldn’t boot up at all. There is currently a fix pending for the issue, and once it’s merged I may opt to try different combinations of variables to see if I can get a faster time. But for now, this is the best I can do.

The resulting TAS gets a 662 for the title screen, a 12 frame loading time for Party Phil, a 1-frame-slower-than-optimal loading time for Flycycle Team, and a 6 frame loading time for the crowd of Miis. Despite my best RNG manipulation efforts, I was unable to get a faster result on any of the other NTSC-U seeds available. It’s possible that I could have gotten a better seed had I expanded my sample size, but I felt that 300 was a decent amount for a project of this size.
RTA timing begins on the frame that “Start” is pressed and ends on the frame that the final score goes dark, resulting in a 1:22.85. This is slower than the RTA world record; however, that run is performed on a modified version of the game with faster load times that was manually adjusted by the moderators, and I suspect that there may have been imperfections in the process. All my testing suggests that the fastest possible RTA time should be 1:22.84 for an NTSC-U version of the game, and 1:23.19 for a PAL version of the game. It’s also possible that there is some additional inaccuracy in how Dolphin emulates load times. 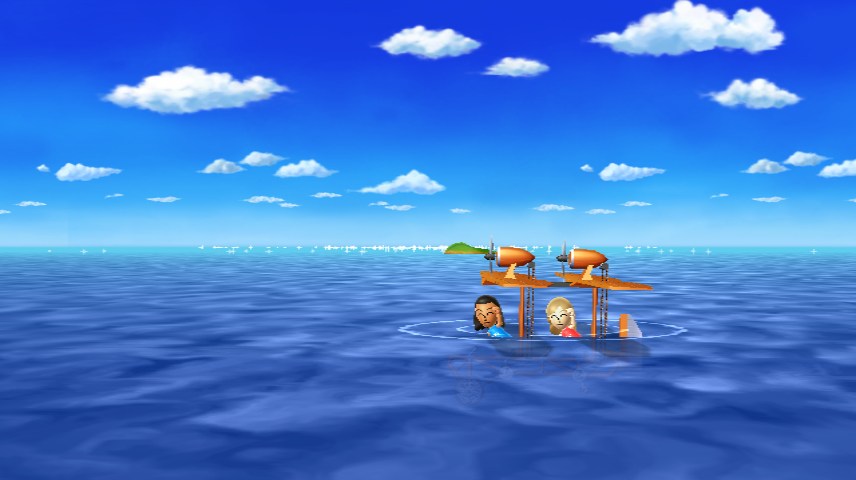 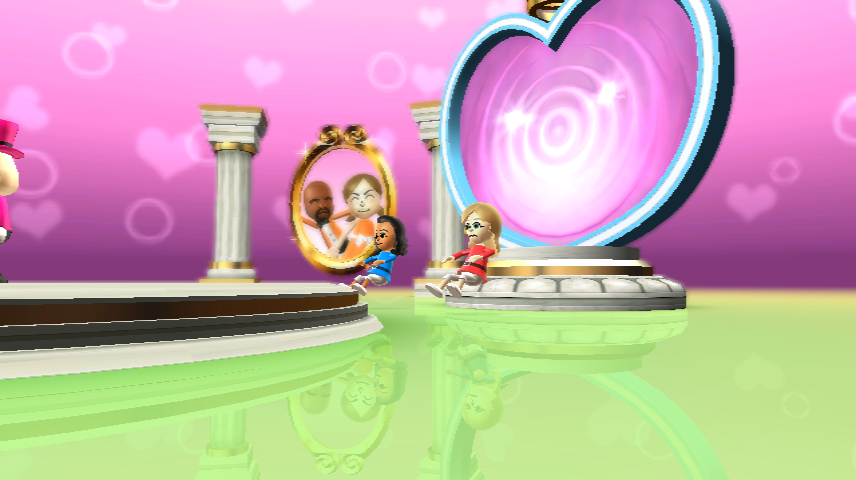 Thanks to:
feos: Claiming for judging.
feos: When comparing gameplay, this run is about 1 second faster than RTA during the questions section, and mostly identical in the next one (because it ends by itself I guess). Loading times play a role in a TAS, but still they wouldn't be a deal breaker as long as gameplay is optimized. Accepting as it a standalone game mode.
fsvgm777: Processing.
Last Edited by fsvgm777 2 days ago
Page History Latest diff