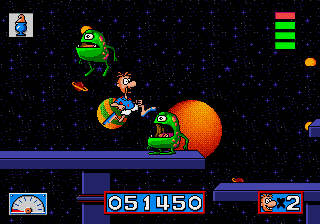 Watch
Based on the comic strip Making It, Normy's Beach Babe-o-Rama was released in 1994 by Electronic Arts. The plot is that Normy's hanging out with some beach babes when suddenly an evil alien ship beams them aboard! Normy receives a note that he's the only one that can save them and so he uses some magic suntan lotion to travel through time to rescue them.
Jules improves their previous TAS by 18.02 seconds, thanks to a new glitch in the third stage allowing one to clip into the boss room, as well as better optimisation.
The baseline tab shows the default movie beating the game as fast as possible without any special conditions.