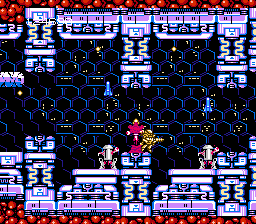 Watch
Abadox is a futuristic sidescrolling shooter developed by Natsume. A gigantic alien organism known as Parasitis has eaten the planet Abadox and everyone on it, including the planet's princess. With time running out, the galactic military sends their best fighter inside the alien to save her before she is digested.
In this run, NecroVMX provides plenty of entertainment during the autoscrolling sections while taking out the level-end bosses surprisingly quickly.
Watch this run being played back on a real console.
The baseline tab shows the default movie beating the game as fast as possible without any special conditions.