This page documents information about Battletoads. Many of the tricks demonstrated here are near impossible in real time and documented for the purposes of creating Tool-assisted Speedruns.
This page is dedicated to NES Battletoads and NES Battletoads & Double Dragon. Both games do have identical tricks.
Table of contents

Run and charge in the opposite direction

While running, simultaneously press opposite direction and attack.

For running while jumping, tap a direction, let go, then tap the same direction + jump and hold that direction. While in the air, you are considered running so you can charge. And when the toad lands, it continues running. This trick is very useful.

Done by holding left+right. Depending on the level, it generates different effects: 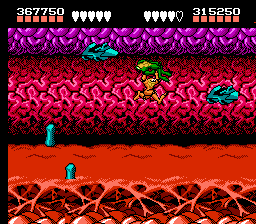 Knock the toad off the jet

When doing 2 players at level 3, it is possible to use a walking toad to hit a toad that is riding the jet. That will make the toad get off the jet, and the jet will stay on whatever position it was when knocked. It is possible by doing this to slowly move the jets to the right, advancing on the 3rd level on bare feet (very slow process).

This is used for bosses fights to reduce time of these animations and to prevent bosses from flying around the screen. You hit at the first possible frame, and at the previous frame you try to add different buttons for the attacking player. If this doesn't help, use another pad on this frame too. This is direct input manipulation, so even if a character is in his own animation at the moment, random input will still take effect.

Jumping from the void

When you are falling into a pit, the screen can kill you if it is not scrolling down. Whether you shall die is checked by your onscreen height. It isn't tracked derectly in RAM and is calculated this way: if depth pos (0x493) - midair height (0x475) > 255, then you die. That means if your onscreen height = 255, you can press A and jump out of nowhere. But because your falling speed is not 1 pixel per frame, you may sometimes miss 255. Try different input to influence it.
HUD script, video demo.

To do this, touch the jet or the surfboard while going up a running jump. Basically, run and jump right before hitting the vehicle. Doesn't work with level 7's airplane because it's not gravity based.

It's possible to end level 10 quickly by finishing off any of the rats. To do this, the rat must be hard hit after the bomb is exploded, and then finished off with a Boot attack. The rat has infinite HP (or higher than was tested), and this is the only way to kill him. The rat seems to have a "boss" flag set to him. So if a boss is killed, the level ends.

Level 10 scrolling down with 2 players

If both toads go over the top of the screen on level 10, the screen starts to scroll down and will only stop if one of the toads somehow falls faster than the other. It will go past the bomb, however, and knocking off the bomb is needed or else the rat will do it. One way to do it is to have player 2 grabbing player 1 at start of the level and doing a jump, then throwing player 1 at the right moment at the bomb. Player 1 grabbing player 2 doesn't seem to work.

Hold down and keep tapping forward

Go through the yellow spike on level 4

The way the game detects the collision to this pike (non hazardous, it just blocks) is actually way too simple. If the player is holding "DOWN" then its not a collision. If not, it is a collision. So it doesn't matter if you are ducking, as long as you hold down, the pike will ignore the toad. 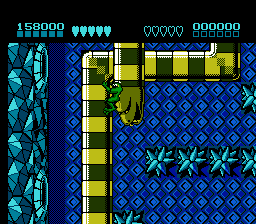 There is a section that can cause a big slowdown on level 6, 3rd section because of the snake bending in a such a way that by grabbing on it's side there's another part of it going behind, causing a difficult collision detection for the game to handle.

The height or horizontal values are, apparently, what tells if the toad should be allowed to fall or get through. It's not a collision detection. This seems to be the case because it's not possible to go through it. It doesn't even budge while trying. So it must be some hard-coded way to say "dead-end" for that direction.

Pass through floor in stage 4.

Must press left+right when on an ascending slope and release after some seconds. You'll start sliding down. It you start falling and press that while behind the background rock, you will be pushed right extremely fast and either fall out of it (if you get to the thin part of it) or die (if there are spikes on the same horizontal level with you loaded into RAM).

Changing the layout of Level 3

Glitch stick in Levels 4 and 9.

By some laggy action you can get a stick & become nearly invincible (except to death spikes). Also the graphics get screwed up. You can break checkpoints with this stick, but this means you don't activate them. But if you then activate some of them twice, the game continues normally.
YouTube playlist with several emulator movies & one console video.

Out of Bounds glitch in Level 9

Take your opponent on your hands & throw him just near the upper border of the tube. He will get out of it. But this outside area still has water and air places separated, just not visual. So you either fall back into the tube, or keep swimming out of it.
The other way to get off the tube is pressing left + right until the bottom of the tube loads off the memory and you can jump over its vertical borders. So, you can get both toads out of bounds.
However, you can't pass checkpoints, you have to activate each one to be able to finish the level.

Hit an enemy or another player until he's almost dying, and prepare the final hit on him, but miss him and hit the enemy that has full health. This last blow is quite powerfull. This doesn't work on bosses (a boss is any "enemy" that will end the level when defeated. This is not the case for Big Blarg). 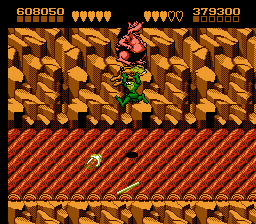 It's possible to lift a toad while he's carrying something or someone.

When you begin the game, quickly headbutt the psycho pig on the left, then the one on the right, proceed to where the Walker appears, you should see a platform and a pulsating warp. Jump up there quickly!!!

In Level 3 (The turbo tunnel) in the last section of the speed bike obstacle course (where the walls pass REALLY fast) slam headfirst into the 10th wall. That should be a warp. (The correct wall is on the bottom of the island BTW)

In Level 4 (Ice Caverns) when you find the platform that falls when you stand on it, go down near the bottom, then jump repeatedly so it goes back up. There should be a warp formed at the top.

In Level 6 (Karnaths Lair) in the 2nd Snake pit, climb on the first snake and run to the right all the way down when the snake reaches the highest point of it's path (don't hit the spikes) there should be a warp on the other side. You must go over there quickly because the warp will disappear before the snake gets there.