This page documents information about Contra. Many of the tricks demonstrated here are near impossible in real time and documented for the purposes of creating Tool-assisted Speedruns.
The purpose of this page is to document all of the known tricks of the NES Contra game so far.
Because of the nature of this site, we concentrate here on tricks that are extremely difficult to execute in real play, but are useful in the making of tool-assisted speedruns. For most of the tricks, a frame advance feature in an emulator is a definite must-have. 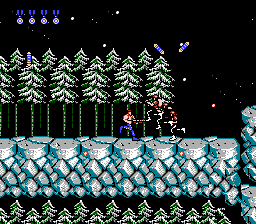 Watch on YouTube
Author notes Discuss
7.97 / 10
Published on 4/10/2022
Contra is a classic action game. Equipped with heavy artillery and infinite ammo, you must save the world by defeating the organization Red Falcon.
This time, Mars608 and aiqiyou improve the previous TAS by 0.44 seconds, thanks to better optimisation.
Obsoletes:
NES Contra "1 player" by alex_ik in 08:48.65 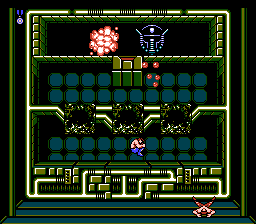 Watch on YouTube
Author notes Discuss
8.5 / 10
Published on 6/26/2022
Contra is a classic action game. Equipped with heavy artillery and infinite ammo, you must save the world by defeating the organization Red Falcon.
Mars608 and aiqiyou have saved nearly a second over their previous run thanks to tighter movement control and a different strategy for reviving the second player.
Obsoletes:
NES Contra "2 players" by Mars608 & aiqiyou in 08:37.53 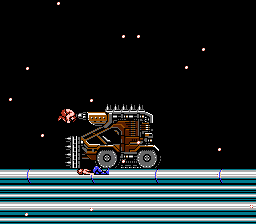 Watch on YouTube
Author notes Discuss
6.9 / 10
Published on 7/6/2022
Contra is a popular side-scrolling shooter game for the NES, infamous for its fragile protagonists. It's also known as 魂斗羅 (Kontora) in Japan, and Probotector in Europe. GryZor is also used in Europe on some other systems. This run focuses on a specific goal: do not kill enemies directly unless absolutely necessary to complete the game.
This is an improvement of 11 frames over the previous publication by the same authors.
Obsoletes:
NES Contra "pacifist" by Mars608 & aiqiyou in 08:47.81

In Stage 3 it is possible to jump to ledges normally impossible by taking advantage of vertical scrolling. To perform it you jump, then press left, then hold right. It seems random, but if you press right at the right frame, you will stay in air for longer than usual and can land on ledges that would normally take 2 jumps.
Conversely, this can also be used to jump shorter than normal. This should be used on all other jumps in order to shave a frame from each one. (In reality many of them can not be shaved this way).

Boss HP can only drop 1 HP per frame. This means the strategy isn't as much about unloading bullets as fast as possible, but instead trying to make sure damage is registered every frame.

The RNG variable at address 0034 is updated by repeatedly adding to it the current frame counter (and carry flag), in an infinite loop until an NMI (vblank) occurs.