This page documents information about Metroid. Many of the tricks demonstrated here are near impossible in real time and documented for the purposes of creating Tool-assisted Speedruns.
Table of contents

Samus can jump while unmorphing. Press up or jump to cancel morph, then jump. If left or right is pressed between unmorphing and jumping, this will not work. Samus will stop when she lands, losing all forward momentum.

Samus can jump while falling. Reach the very edge of a platform and release left/right. If done at the right frame, Samus will fall, but still be in the standing position. She will now be able to jump if she hasn't moved. Samus will stop when she lands, losing all forward momentum.

Samus can get extra height using a bomb. Lay a bomb and unmorph. The bomb will push her upwards, and you can then jump for extra height, as long as you do not press any movement keys between the bomb blast and jumping. Samus will stop when she lands, losing all forward momentum.

If distance is also required, Samus can perform a horizontal bomb boost jump. Lay a bomb and unmorph. Move very slightly in the direction needed. Samus should move only a few pixels. Jump after the bomb explodes, like a normal bomb boost jump, and Samus will jump very high and far.

Fire Missiles After a Beam / Bomb

Normally Samus cannot fire a missile if another weapon sprite is on-screen. If you fire a missile, then fire a beam or bomb, you are able to fire missiles afterwards. 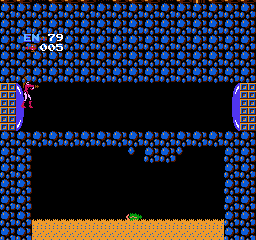 The door glitch can be used to give Samus access to areas she otherwise wouldn't be able to, including secret worlds. To perform this, open a blue door and stand inside it, but do not enter the next room. When the door closes, Samus will be stuck inside of it. By rapidly morphing and unmorphing, she can move herself vertically through the wall. Do this repeatedly and she will wind up at the bottom of the screen. To reach the top of the screen, stop and jump repeatedly to scroll the screen upwards, before Samus dissapears off the top of the screen. 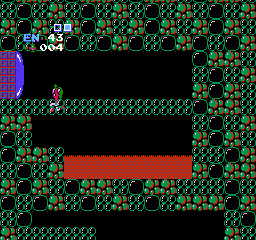 In certain areas, there are blocks that Samus can morph jump through. This is very conditional. There must be a single row of blocks two blocks above a platform; just enough space for her to stand between them. Morph and quickly morph jump, and she can pass through the block above. This is very difficult to perform in real-time.

As far as I can tell, item drops from monsters are determined solely by the frame the monster is killed. Simply kill the monster at different frames to change what it will drop.

Monster spawning can be manipulated to a degree, by the amount of monsters on-screen. You will need to kill a monster about two screens away from the area you wish to manipulate, or before entering a door.

Use the door glitch downward to get below the row of blocks and proceed normally to the Ice Beam.
See the Any% run, the No-Miniboss run, or the 100% run for an example.

There are actually four different ways to do this. The fastest is to use a horizontal bomb boost jump from the platform, just before falling through the fake blocks. A double bomb boost jump can also be used. A slower way is to door glitch upward using the left door. The last way would be to lure a waver up to the top area, and then use the Ice Beam to freeze it for a platform. This is difficult, and is the slowest method.
See the 100% run for an example.

Use the door glitch downward to get below the row of blocks and proceed normally to Kraid's hideout.
See the Any% run or the 1-Item run for an example.

Lower Norfair and Ridley Without Bombs

Use the door glitch downward to get below the row of blocks. Samus now has access to Ridley's hideout, as well as the many items in this part of Norfair.
See the 1-Item run for an example. 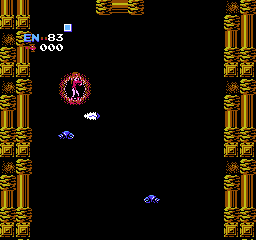 Climb the far right Brinstar shaft, until there are no more platforms. Use the rippers as platforms by freezing them and jumping onto them. If the last ripper is in the right position, a double bomb boost jump will lift Samus high enough to get to the next platform, and into the top corridor. Alternatively, the waver that flies around can be frozen to use as a platform to get up, although this is much slower and more difficult.
See the 100% run for an example. 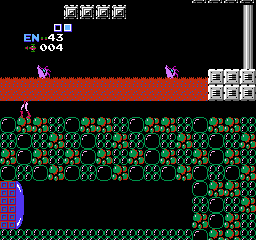 After getting the energy tank in Norfair, head back to the small shaft to the right. Go to the top door and you can door glitch upwards into the room before the Hi-Jump Boots. Do not exit out the door to the right, or else the shaft will not scroll vertically! Instead get onto the platform with the crawly monster, then jump at full height to the left. The screen will scroll as if you entered another room, but will scroll normally when it is done. If done correctly, you can now exit through the door to the right, and the shaft should scroll correctly.
See the 100% run for an example.

Abusing the movement system, you can press different direction on various frames (mostly "first" frames and when Samus reaches the "next" speed (from -1 to -2 for example) while still moving to the same direction without changing the speed. TODO:Find out why. ROM is same after 1500 frames (start-OoB) but different after (OoB-door) 2300 frames

Same as above, you can use this to decrease your speed earlier before actually switching direction. TODO:Elaborate side effects (different pos at next room and lag) and effectiveness (low but useful)