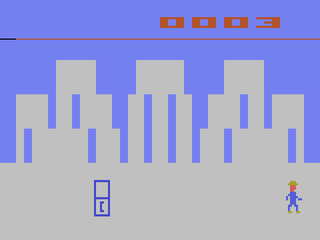 Watch
From Wikipedia:
The player(s) takes control of the DC Comics character Superman, who must repair the bridge destroyed by Lex Luthor, capture Luthor and his criminal underlings, enter a phonebooth to turn back into Clark Kent, then return to the Daily Planet in the shortest amount of time. To slow Superman's progress, Kryptonite has been released by Luthor. If hit by Kryptonite, Superman loses his abilities to capture criminals and fly. To regain them, he must find and kiss Lois Lane.
This is a 30 frame improvement over the previous run, thanks to a faster change of crossing over to the next screen instead and initiating the pause demo glitch to warp to the end. That is all.