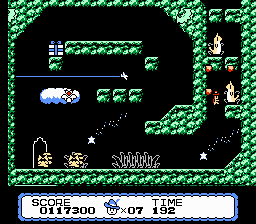 Watch
Armadillo (アルマジロ) is a game released only in Japan about the titular young cowboy from Texas, who is in love with Sheryl, the cutest girl of the state. However, an evil organization kidnaps his sweetheart. The matters become even more complicated when the famous Billy The Shell also embarks on a quest to save Sheryl. Will Armadillo be able to rescue the girl and to defeat his enemies?
The starting gameplay consists of moving Armadillo around an area map composed of squares. Some of them are empty, while others represent locations. Once you enter a location, you find yourself on a platform level, that often contains several sub-levels. There are sometimes branching ways on the area map, and you are not obliged to access all the locations to clear an area. On the platform levels, Armadillo can either walk and jump in his normal form (dies from single enemy hit), or turn into a ball, which is invulnerable to enemies' attacks, but is hard to control: the ball follows realistic physics, bounces of walls, and takes time to stop rolling. During the game, Armadillo will also be able to find upgrades that will allow him to take an animal's form for a short time.
The baseline tab shows the default movie beating the game as fast as possible without any special conditions.