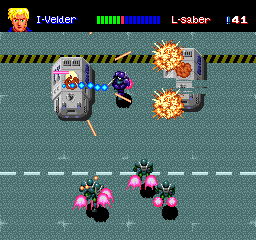 Watch
Final Zone II is a top down shooter in which you control various soldiers throughout the game. The objective of the game is to fight an enemy army led by "ZOD", who is a mass murderer and killed some of your commando friends. There are several manga-style cutscenes in the game, all of which have been really cheesily dubbed to English. The game also features the "best" song to ever feature in a video game, that is, Momoco's theme (which you'll hear in Round 4).
Noxxa defeats Ruman in record time.
If you want to see the game being riffed along with all the cutscenes, we recommend watching the videos by retsupurae:
Part 1
Part 2
The baseline tab shows the default movie beating the game as fast as possible without any special conditions.