King's Quest: Quest for the Crown 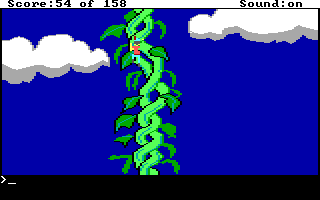 Watch
King's Quest: Quest for the Crown is a game first released by Sierra On-Line in 1984, then re-released in 1987. In it, Sir Graham has to retrieve three magical items from the realm, so that he can be crowned King of Daventry after the current king dies.
DrD2k9 improves his previous TAS by 2.45 seconds, thanks to a new route that uses different glitches. Please read the author's comments for more details.
Due to the sheer speed of the movie, the second set of downloadables play back the movie at 1/5th of the regular speed.
The baseline tab shows the default movie beating the game as fast as possible without any special conditions.