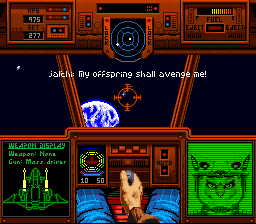 SNES Wing Commander by ShesChardcore in 15:40.27

Watch
Wing Commander is a space flight shooter game that was originally developed for MS-DOS and later received ports to many systems such as the SNES, Sega CD, and PlayStation. In this game, you are an upstart soldier in the war between the Terrans and the Kilrathi, which are feline bipedal aliens whose social values are very incompatible with humanity's. Take command of a ship and complete missions that will either lead you to eventual victory or failure, depending on how you play.
ShesChardcore completes the game in record time by completing only the missions necessary to get the good ending. In doing so, half of the missions taken are forfeited as soon as possible by ejecting from the ship. For more details such as the story route taken, you can read the author's notes.
The baseline tab shows the default movie beating the game as fast as possible without any special conditions.