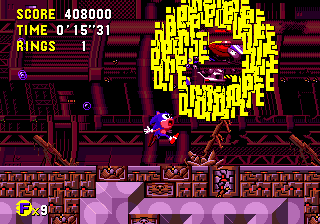 Watch
Sonic the Hedgehog CD was developed to showcase a new Genesis/Mega Drive peripheral, the Sega CD.
The game is markedly different than other Sonic games; aside from "improved" graphics and sounds, each level has 2 to 4 alternate versions that correspond to different time periods. Sonic can move between them to affect the gameplay and ending.
This run is 31.53 seconds faster in in-game time than nitsuja's run thanks to various optimization and minor route changes. For more information on the improvements, please read the author's submission notes.
There are two sets of downloadable encodes, the first recorded with the American region music and the second with the Japanese region music, and four sets of YouTube encodes, one with American region music, one with Japanese region music, one with American region music and with the camera hacked to stay on Sonic, and one with Japanese region music and with the camera hacked to stay on Sonic.
There is also a run of Sonic the Hedgehog Megamix played as Sonic on his SegaCD version. We also have movies in Sonic the Hedgehog, Sonic the Hedgehog 2 and Sonic 3 & Knuckles.
The baseline tab shows the default movie beating the game as fast as possible without any special conditions.