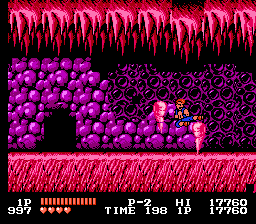 Watch
Set in a post-apocalyptic New York, Double Dragon is the story of Billy and Jimmy Lee, twin brothers trained in the fighting style of Sou-Setsu-Ken. Together, they manage a small martial arts training school, teaching their students in self-defense. One day, Billy's girlfriend, Marian, is kidnapped off the street by the "Black Warriors", a savage street gang led by a man named Willy. The Black Warriors demand the Lee brothers disclose their martial arts secrets in exchange for Marian's freedom. The Lee brothers set out on a rescue mission to crush the Black Warriors and save Marian.
Released on many systems, this game was so popular that they even released it for cellular phones and made a board game. Even a Hollywood movie has been made.
Alyosha improves the previous publication by 7.19 seconds, thanks to a completely different experience route in order to get the elbow attack earlier in Mission 4.
Watch a resync of this run being played back on a real console.
The baseline tab shows the default movie beating the game as fast as possible without any special conditions.