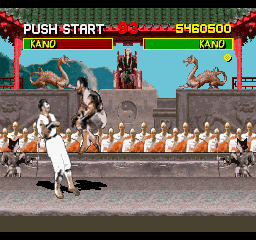 Watch
Mortal Kombat is a side-scrolling fighting game. Fighting is set as one-on-one combat, allowing each player to perform a variety of punches, kicks, and special moves in order to defeat their opponent. When the opponent faces their second round loss, the winner can perform a finishing move called a "Fatality" on the loser. The Fatality is a move unique to each fighter that graphically kills the loser in a blood-soaked finale. This can however not be said for the SNES version, as it got heavily censored.
KusogeMan becomes the ultimate Mortal Kombat warrior in record time.
The baseline tab shows the default movie beating the game as fast as possible without any special conditions.