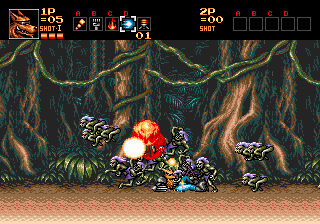 Watch Download (.gmv)
Author notes Discuss
7.22 / 10 Votes: 24
Contra: Hard Corps is the only game of the Contra series released on the Genesis / Mega Drive console. In this game, you get to choose between four characters, each with different abilities and weapons.
This game has four completely different final stages, each with a different ending, depending on the choices you make earlier.
The Japanese version was chosen because, for some reason, it gives the players a health bar, allowing them to take some damage without dying.
Fang is used due to a glitch that allows him to deliver fully charged D weapon shots, without taking time to charge it.
Published on 4/14/2008
Obsoletes:
Genesis Contra: Hard Corps "1 player" by Gigafrost in 15:50.70