SegaCD Sonic the Hedgehog CD by nitsuja, upthorn in 18:04.75 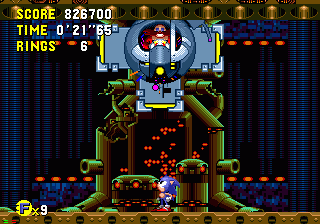 Watch Download (.gmv)
Author notes Discuss
7.02 / 10 Votes: 17
Sonic the Hedgehog CD was developed to showcase a new Genesis/Mega Drive peripheral, the Sega CD. Likewise, this movie is the first of its kind on TASVideos and showcases the newly updated Gens emulator that allows for making stable movies of Sega CD games.
The game is markedly different than other Sonic games; aside from "improved" graphics and sounds, each level has 2 to 4 alternate versions that correspond to different time periods. Sonic can move between them to affect the gameplay and ending.
However, upthorn and nitsuja ignore this entirely and tear through the game in standard Sonic TAS style, skipping many portions of the levels with unintended shortcuts and leaving the camera to try to catch up.
There are two AVIs, the first recorded with the US music and the second with the Japanese music.
Published on 7/26/2008
See full publication history
Game:
Sonic the Hedgehog CD
Genres:
Action
Platform