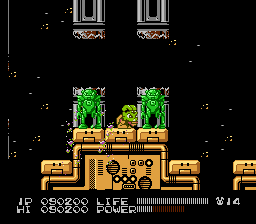 Watch Download (.fmv)
Author notes Discuss
8.1 / 10 Votes: 0.5
A little-known game based on an old cartoon, in Bucky O'Hare you soon have access to 5 unique characters, each of which has a special ability ranging from flight to a powerful gunshot. What's more, it is not necessary to access a menu in order to switch from character to character, allowing the player to use whomever they'd like without sacrificing any time. A wide variation in levels is also seen, ranging from outerspace self-scrolling levels, to fast paced platform-based levels inside a large spaceship.
Published on 7/10/2004
See full publication history
Game:
Bucky O'Hare
Genres:
Platform
Shooter