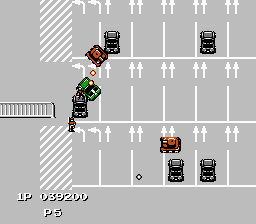 Watch Download (.fcm)
Author notes Discuss
6.45 / 10 Votes: 25
Unfortunately, Red from the last year's carnage got into an accident involving a badly thrown grenade and a few land mines, so Green takes it on all by himself in this new episode of Jackal.
Not having to deal with the larger amount of two-player mayhem also means the game goes faster, which is a win for everybody. (Except that Red guy.) Coupled with better playing, this constitutes the 9 second improvement over the previous movie by xipo.
This movie has an Atlas Map encode of Stage 6, which shows the standard encode overlaid on a zoomed out map.
Published on 8/10/2008
Obsoletes:
NES Jackal "2 players" by Xipo in 07:36.90

Tags:
One player in a multiplayer game
Uses hardest difficulty