NES Dungeon Magic: Sword of the Elements by FatRatKnight in 01:02.83 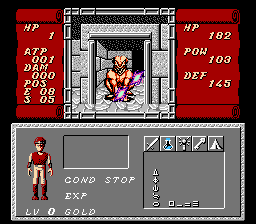 Watch Download (.fm2)
Author notes Discuss
7.72 / 10 Votes: 42.5
After hearing about how the dark overlord Darces has returned, our hero goes on a quest to unite one element in order to save the kingdom.
In this storybook-view RPG, the author zooms around the game world, entering the most dangerous of dungeons, killing two powerful monsters, and collecting the bare minimum needed to beat the game in incredible fashion. Despite the player being unable to survive one hit, the author subverts certain death with the handy pause system. Despite the player supposedly being unable to damage the monsters, an underflow glitch allows for massive damage. Despite the final boss standing right there to kill him, the viewer sees all of 3 frames of the dark overlord. It's an RPG done in just over one minute, without warping or save glitching.
The author had spent much effort in understanding the game, and all that work has finally paid off. We recommend reading the author's comments.
Published on 10/13/2008
See full publication history
Game:
Dungeon Magic: Sword of the Elements
Genres:
RPG

Emulator Version:
FCEUX 2.0.2
Webmasters, please don't link directly to the files. Link to this page or the front page instead.
Republication of movies from this site is only allowed under the following conditions:
Do not label them with speculations. If unsure, ask the site staff for details.