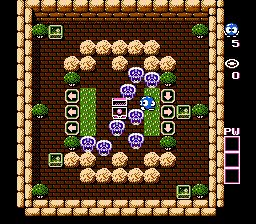 Watch
Adventures of Lolo (1989) was the first game of the Eggerland series that received a Western release. Interestingly, the series was developed by HAL Laboratory, who also created the Kirby series, and Eggerland protagonists Lolo and Lala make cameo appearances in Kirby games as Lololo and Lalala.
The goal of the game is to collect all of the hearts in every stage and then get the ball from the chest to open the door to the next room. Though it may seem simplistic, it remains a truly well-made puzzle. Finding optimal solutions to most of the rooms has proven to be a very nontrivial task, and every once in a while a new improvement is found.
This run improves the previous record by 0.26 seconds.
Watch this run being played back on a real console.
The baseline tab shows the default movie beating the game as fast as possible without any special conditions.