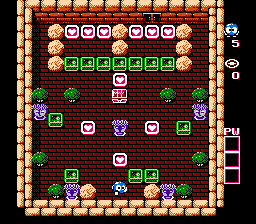 Watch Download (.fm2)
Author notes Discuss
5.82 / 10 Votes: 23
Adventures of Lolo (1989) was the first game of the Eggerland series that received a Western release. Interestingly, the series was developed by HAL Laboratory, who also created the Kirby series, and Eggerland protagonists Lolo and Lala make cameo appearances in Kirby games as Lololo and Lalala.
The goal of the game is to collect all of the hearts in every stage and then get the ball from the chest to open the door to the next room. Though it may seem simplistic, it remains a truly well-made puzzle. Finding optimal solutions to most of the rooms has proven to be a very nontrivial task, and every once in a while a new improvement is found.
As such, this is Baxter's 10th attempt at this game, this time 00:10.15 seconds faster than the previous with the help of Zugzwang. Eleven rooms have been improved.
This movie has a full Atlas Map encode, which shows the standard encode overlaid on a zoomed out map.
For the weak-spirited who aren't willing to watch the run all over again only for the improved rooms, the authors have inserted an easter egg into the input file! If you run the same .fm2 on the NES game Defenders of the Crown, it will complete it as well in just 3 minutes and 38 seconds.
Use the ROM "Defenders of the Crown (U).nes" to watch it.
Published on 4/4/2009
Obsoletes:
NES Adventures of Lolo by Baxter in 22:37.07