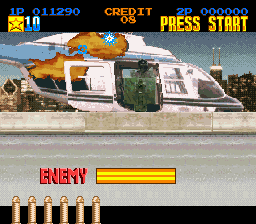 SNES Lethal Enforcers by Lobsterzelda in 35:10.31

Watch
Lethal Enforcers is an arcade shooting game developed by Konami. You take control of an officer named Don Marshell, an elite cop who has to fight a major criminal organization that has taken the city of Chicago hostage.
The game features digitized sprites of real people, and came with a light gun called the justifier, which was similar to the NES’s zapper. This lead to controversy as it depicts the idea of shooting real people, and was one of many games brought up in the 1993 violence in video games US Senate hearing.
Watch as Lobsterzelda uses lightning fast reflexes to shoot the bad guys and save the city, all while saving 2 minutes and 18.36 seconds from the previous movie after accounting for emulation differences.
The baseline tab shows the default movie beating the game as fast as possible without any special conditions.