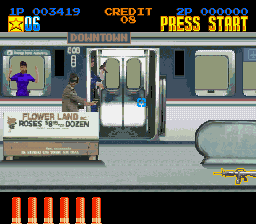 Watch Download (.smv)
Author notes Discuss
3.66 / 10 Votes: 9
Lethal Enforcers is a rail shooter with graphics made from digitized photographs. This controversial use of photorealistic enemies helped earn this title one of the first MA-17 ratings for video games and kept it off some toy store shelves.
You control Don Marshall, a Chicago cop who is called in to help stop a major crime organization that has invaded the city. Armed with his standard-issue service revolver, he sets out to stop this growing crime wave and save the day.
The bad guys pop out at a fixed rate, so shooting them faster only speeds up the boss fights.
Published on 12/8/2012 12:00 AM
See full publication history
Game:
Lethal Enforcers
Genres:
Shooter