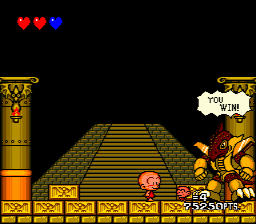 Watch on YouTube
Author notes Discuss
6.99 / 10
Published on 6/17/2009
Bonk's Revenge is the second game in a popular PCE/Turbographx 16 platforming series. Thankfully despite the console's unpopularity some of the games in the series were ported elsewhere. Bonk is a caveman with a giant noggin he willingly uses as a weapon against his enemies. He can also break the laws of physics by using his enormous head as leverage to glide in midair.
This run by FuzZerd features all the trappings of a prehistoric blockbuster adventure, including fire breathing, jungle platforming, raging on huge dinosaurs before they know what hit them, and raw meat.
See full publication history
Game:
Bonk's Revenge
Genres:
Action
Platformer

Emulator Replay:
PCEjin svn209
Download (.mcm)
Webmasters, please don't link directly to the files. Link to this page or the front page instead.
Republication of movies from this site is only allowed under the following conditions:
Do not label them with speculations. If unsure, ask the site staff for details.