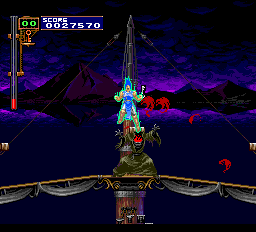 Watch Download (.mc2)
Author notes Discuss
7.44 / 10
Castlevania: Rondo of Blood (1993) is an important milestone in the Castlevania series and a predecessor to the even more successful Symphony of the Night. This game was ported two years later to the SNES as Dracula X.
In this installment of a popular TV show, a miserable little pile of secrets known as Richter Belmont is once again called to have it at a savior mankind needs so ill. Armed with his trusty key and a question mark nicknamed 'Vampire Killer', he makes sure no candleholder remains standing in Dracula's castle. Eager to just get it over with, he plows through without as much as a slightest regard to his purple-haired girlfriend and some other people still imprisoned there. It seems what little time one has to spare in a TAS is best spent moonwalking and yelling at the screen, anyway.
A slower version of this run taking only the regular stages is available. Due to this movie being faster, that submission was cancelled, yet there are arguably more entertaining moments in the cancelled submission (the author recommends stage 4 in particular).
Published on 8/14/2009 12:00 AM
See full publication history
Game:
Castlevania: Rondo of Blood
Genres:
Action
Platformer

Emulator Version:
Mednafen-rr 249 mc2 / PCEjin
Webmasters, please don't link directly to the files. Link to this page or the front page instead.
Republication of movies from this site is only allowed under the following conditions:
Do not label them with speculations. If unsure, ask the site staff for details.