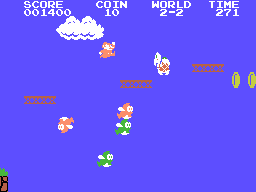 Watch
Super Boy II is a 1989 clone of Super Mario Bros. created by the Korean pirate company Zemina (재미나, roughly translates to "It's fun!") and is the sequel to its earlier game, Super Boy I. Besides having bad controls and graphics, this game leaves out some of the original features, including warp zones, water levels, Worlds 5-8, and even the princess.
nitrogenesis improves the previous TAS by 0.87 seconds, thanks to better optimisation and a few new strategies. Please read the author's comments for more details.
The baseline tab shows the default movie beating the game as fast as possible without any special conditions.