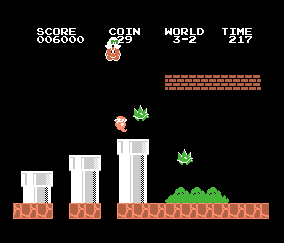 Watch Download (.bk2)
Author notes Discuss
6.38 / 10 Votes: 5
Super Boy II is a 1989 clone of Super Mario Bros. created by the Korean pirate company Zemina (재미나, roughly translates to "It's fun!") and is the sequel to its earlier game, Super Boy I. Besides having bad controls and graphics, this game leaves out some of the original features, including warp zones, water levels, Worlds 5-8, and even the princess.
EZGames69 and Memory saved 00:10.68 seconds (if we ignore BIOS time) over the previous run by managing screen updates and Mario's speed. Actions that affect screen updates include collecting too many coins at once, hitting blocks from below, and running on falling platforms.
Published on 9/21/2019 12:00 AM
Obsoletes:
SMS Super Boy II by NitroGenesis in 05:55.24