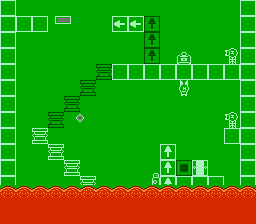 Watch
A boy named Satoshi suffers from a unique type of color blindness — he can only see in black and white. However, he also has a special ability to turn solid objects intangible and vice versa! But despite the amazing power he holds, Satoshi only wants to see like a normal boy. He seeks out an answer to his vision problem in a mystical manor called the Denine Devil Mansion, where he meets a scientist who offers him a game. If Satoshi wins, he might gain the ability to see in color. With that goal in mind, Satoshi accepts the offer and begins the Inversion game.
In each level, Satoshi must collect all of the keys to open the door to the next map. He can use his special ability to change the solidity of all objects in the level and reveal solutions to the game's many puzzles. Springs, moving platforms, vertical conveyor belts and levers can also be used to his advantage.
In this run, MESHUGGAH & jhztfs use a few tricks and a lot of precise movement to help Satoshi beat the game in record time. This run is 00:05.94 seconds faster than the previous version by MESHUGGAH.
You can watch the complete run being played back on a console. 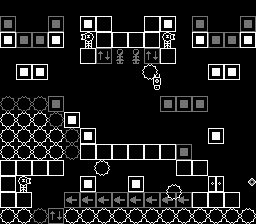 Watch
Inversion is a homebrew game created by Lucas "Dizzy9" Kur. The goal of the game is to collect all of the keys from each map to open a door leading to the next level. The game also features a more challenging level set called the "Extra World", accessible by entering a password.
Here, MESHUGGAH and jhztfs play through the Extra World, using a few tricks and glitches as well as precision to beat this mode as quickly as possible. This run is faster than MESHUGGAH's previous version by 00:01.43 second.
We also have a run of Inversion's main mode.
You can watch the complete run being played back on a console.
The baseline tab shows the default movie beating the game as fast as possible without any special conditions.