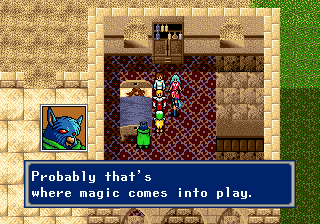 Download (.gmv)
Author notes Discuss
6.3 / 10 Votes: 7
In this final installment of the famous Phantasy Star saga, our protagonist, while out on a routine assignment, uncovers evidence pointing to a sinister threat to the entire solar system. One thing leads to another and he and the rest of his party eventually find themselves fighting the root of all evil. Such a quest would normally take at least ten hours, but with copious amounts of luck manipulation, it can be reduced to just under an hour and a half.
This is an improvement of 7 minutes and 15 seconds over the previously published run. A large part of this improvement is due to a new strategy involving a rollover glitch which boosts Chaz's strength. This glitch requires Chaz to have a low level, so Janus gets Chaz killed in many battles to avoid leveling him up.
As a bonus, FreshFeeling has provided an audio commentary which explains many of the strategies and provides some interesting trivia.
Published on 3/14/2010 12:00 AM
Obsoletes:
Genesis Phantasy Star IV by janus in 1:35:58.80